The film director who's not allowed to go to the movies - CNN.com 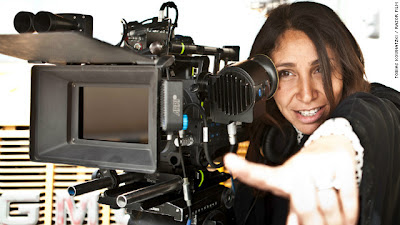 (CNN) -- Haifaa Al Mansour has just directed one of the first feature films ever to be made in Saudi Arabia. But she won't be able to watch it at her local theater, because cinemas are banned in the kingdom.

The film, called "Wadjda," after its protagonist, is billed as the first to be filmed entirely in Saudi Arabia with an all-Saudi cast. It is currently playing in movie theaters and festivals worldwide.  Here is the trailer:

Al Mansour, 39, worked for an oil company until the age of 30, when she decided to give up her job to pursue her passion.

"When I turned 30, I really wanted to have a voice," said Al Mansour. "People don't listen to women in Saudi, they just jump to the next man to speak. I loved films and just decided to become a filmmaker."

She studied film in Sydney, Australia, and has previously made three short films and a documentary. She is Saudi Arabia's first female film director, according to the production company.

The film, written and directed by Al Mansour, tells the story of an 11-year-old girl growing up in traditional society in the suburbs of Riyadh and desperate for a bicycle, which she's not allowed.

"I have a niece, she is very bright and always wanted to do things, but her family is traditional and as she grew older wanted her to stay at home like everyone else," said Al Mansour. "I based the story around her.

"Outdoor activities like riding a bicycle are not allowed for girls. It's not exactly against the law, but she would get into trouble."

Al Mansour hopes that Wadjda will help to change attitudes to both women and films in Saudi Arabia. "I hope it will inspire many girls in Saudi to become filmmakers," she said. "That makes me very proud.

"People have contacted me with death threats, but that doesn't matter to me. Everyone in the media business in Saudi receives death threats."