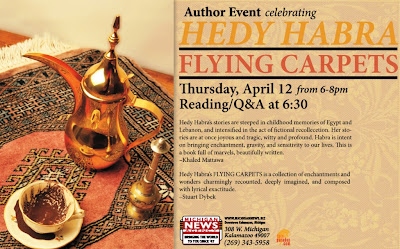 Habra`s 21 stories are steeped in memories of her childhood in Egypt and Lebanon, and offer a glimpse of a way of life, in an attempt to recapture voices, scenes, and situations through the transformative power of memory and imagination. Characters evolve from 1936 to the late seventies, then become less rooted in time and space, as surreal, dreamlike elements intensify.

Stories in Flying Carpets recover lost, partially forgotten and imaginary spaces, progressing from the concrete to the universal with a touch of magic realism. Throughout the book, storytelling and fortunetelling evoke a mythical past that is at the same time lost yet alive. Love, loss, alternate worlds, the yearning for origin and the need to reinvent oneself through art permeate its pages.

Hedy Habra`s FLYING CARPETS is a collection of enchantments and wonders charmingly recounted, deeply imagined, and composed with lyrical exactitude. It belongs to that rare tradition of books whose spells grow increasingly seductive with each new story. "

Stuart Dybek, author of Coast of Chicago and Sailing With Magellan

The culmination of twenty years of work, Flying Carpets is a book of self-reflection. Some of the stories evoke the fascination with divination powers, others portray the efforts of a woman to resist a controlling husband, an old nanny whose survival relies on her abilities to invent new stories to put the children to sleep, a woman who returns after decades to the house where she was born and confronts her past in an unexpected way.

Hedy Habra, born and raised in Egypt, is of Lebanese origin. She has lived in both countries as well as in Greece and Belgium before making her home in Kalamazoo, Michigan. She received her MFA and a PhD in Spanish Literature from Western Michigan University where she currently teaches. Her poetry and fiction in French Spanish and English have appeared in numerous journals and anthologies, including Parting Gifts, Puerto del Sol, The New York Quarterly, Cider Press Review, Nimrod, Poet Lore, Inclined to Speak and Dinarzad`s Children Second Edition. Her critical essays have appeared in literary journals such as Chasqui and Latin American LiteraryReview.