Stanford Lecturer + Arabology Program host Dr. Ramzi Salti was recently invited by The Department of Humanities in the School of Arts and Sciences at the Lebanese American University (LAU) to give a talk titled "Identity, Representation, and the Creation of an Alternative Discourse in the Poetry of Jawdat R. Haydar" to mark the 115th anniversary of the renowned Lebanese poet’s birth.
The talk took place online on April 29, 2021 and was followed by a lively Q&A session. With special thanks to Professor Vahid Behmardi, Mrs. Shahina Osseiran, and the Friends of Jawdat Haydar.
You can watch a video of the talk below or at https://youtu.be/ZDMa7uER23Q
FOR POWERPOINT PRESENTATION ONLY (NO VIDEO):
You can also view the PowerPoint through this link where you can click on right arrow to advance to next slide.
EVENT ANNOUNCEMENT: Also see this link 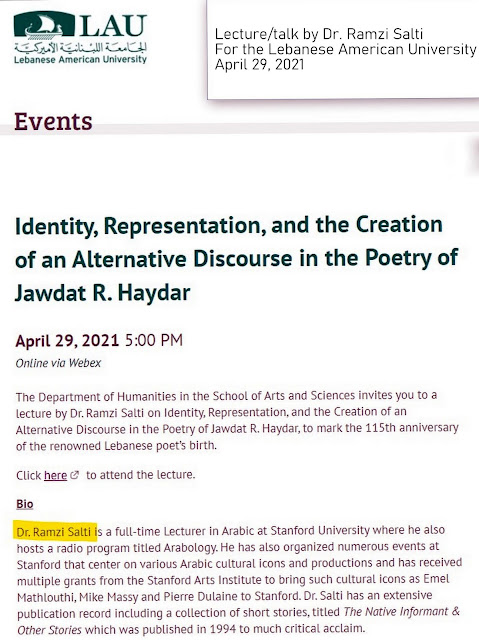 RAMZI SALTI'S BIO:
Dr. Ramzi Salti is a full-time Lecturer in Arabic at Stanford University where he also hosts a radio program titled Arabology. He has also organized numerous events at Stanford that center on various Arabic cultural icons and productions and has received multiple grants from the Stanford Arts Institute to bring such cultural icons as Emel Mathlouthi, Mike Massy, Yasmine Hamdan and Pierre Dulaine to Stanford.  Dr. Salti has an extensive publication record including a collection of short stories, titled The Native Informant & Other Stories which was published in 1994 to much critical acclaim.
VIDEO FROM THIS TALK: Watch below or at https://youtu.be/ZDMa7uER23Q
at May 04, 2021 No comments: