I have blogged about Jordanian singer  Hana Malhas and her amazing music and talent  previously at http://author32.blogspot.com/2012/07/hana-malhas-jordanian-singer-who.html

Cohesive and complex, each performed track maintained undertones of melancholy, while simultaneously achieving the catchiness of a pop tune.

“Her voice has a great deal of texture and soul…[Malhas’s] songs are both deeply felt and full of fresh images...[she] has an unusual knack for using elemental nature images with emotional resonances.” -Ann Arbor Oberserver

One writer, Philip Logos, describes the album: “Hana’s voice is at times haunting, and hard-hitting at others. The songs are relatable, not because of universal themes or catchy tunes – for frequently both music and lyrics take an unexpected (and therefore interesting) turn – but rather because of the unabashedly exposed nature of the writing, which can only be the product of Hana’s sincere approach to connecting with her audience.”

Released in September 2012, The Palestinian Executive (Ashgate) is a book that is based on field research in the West Bank and Gaza, which involved interviewing 110 executives from 63 publicly and family-owned companies. Using a cross-cultural and contextual approach, the authors examine the leadership styles of successful senior executives and managers living and working under challenging conditions in Palestine.

The book explores the impact of culture, environmental pressures, and harsh circumstances on doing business in Palestine; sheds light on the leadership, interpersonal, and decision-making styles of successful Palestinian executives; provides specific recommendations on how to develop future business leaders.

About the Authors:
Farid A. Muna studied and worked in both the West and the Middle East. He earned his MBA from the University of California, Berkeley, US, and his PhD from London Business School, UK. He is Chairman of Meirc Training & Consulting. Dr Muna is the author of The Arab Executive and Seven Metaphors on Management, and the co-author of Developing Multicultural Leaders.
Grace C. Khoury has been a faculty member in the business administration and marketing department at Birzeit University, Palestine for over twenty two years. She is also the director of the MBA program. Dr Khoury has written a number of case studies and published several articles on leadership, entrepreneurship, and management. She holds an MBA from Suffolk University, Boston, USA, and a PhD in Human Resource Management from Bradford University, UK.

Ruse and Wit
The Humorous in Arabic, Persian, and Turkish Narrative
Edited by Dominic Parviz Brookshaw

The essays in Ruse and Wit examine in detail a wide range of texts (from nonsensical prose, to ribald poetry, titillating anecdotes, edifying plays, and journalistic satire) that span the best part of a millennium of humorous and satirical writing in the Islamic world, from classical Arabic to medieval and modern Persian, and Ottoman Turkish (and by extension Modern Greek). While acknowledging significant elements of continuity in the humorous across distinct languages, divergent time periods, and disparate geographical regions, the authors have not shied away from the particular and the specific. When viewed collectively, the findings presented in the essays collected here underscore the belief that humor as evidenced in Arabic, Persian, and Turkish narrative is a culturally modulated phenomenon, one that demands to be examined with reference to its historical framework and one that, in turn, communicates as much about those who produced humor as it does about those who enjoyed it.

Before arriving at Stanford, Dominic Parviz Brookshaw taught medieval and modern Persian literature and Persian language at the University of Manchester (2007-2011), McGill University (2005-2007), and the University of Oxford (2002-2005). Since 2004 he has served as Assistant Editor for Iranian Studies. He is a member of the Board of the International Society for Iranian Studies (ISIS), and a member of the Governing Council of the British Institute of Persian Studies (BIPS).

My thanks to Lily Harries for contributing this piece to 'Arabology'

While India may generate the most jaw dropping box office and Japan may lead the way in terms of technical innovation, it is arguable that the most consistently challenging and fascinating cinema to come out of Asia over the last half century has come from Iran. While the commercial end of Iranian film has always offered a plethora of crowd pleasing fare for a hugely cini-literate public, the country’s most interesting films have consistently come from successive generations of what is known as the Iranian “New Wave”, a movement which began in the late 1960’s and survives to this day in the work and souls of the country’s most imaginative film makers.

New Wave films are characterised by their poetry, visual artistry and subversive subject matter. Often they are highly politicised in tone, challenging accepted political and religious notions in a country where both topics are always liable to cause debate. For those new to this most rich, rewarding and radical genre, here are some of the most notable films to come out of this school from its inception to the present day.

Next time you’re looking for something a little different when renting on LoveFilm or shopping for DVD Amazon bargains consider these ground-breaking titles.

The Cow (1969), Dir: Dariush Mehrjui
While there is quite some debate about what, exactly, was the very first film of the Iranian New Wave, most cinema scholars will cite Mehrjui’s late 60’s masterpiece as the film that opened the gate for this period of innovation. Concerning the heart breaking, surreal effect of his beloved cow’s death on a poor middle aged villager, it is a quite extraordinary look at grief and mental illness, distinct from anything audiences had encountered before.

Whereas The Cow received widespread praise from all sections of Iranian society, Nasser Taghvai’s 1973 film found itself banned by the ruling government due to its profoundly subversive subject matter. The moving tale of a retired army colonel and his, and his daughter’s, battles with depression and insanity, it was considered too extreme by the powers that be. Outside of Iran it was immediately praised as a cinematic triumph, winning a diploma of honour at the Venice Film Festival of 1972.

The Koker Trilogy (1987-1994) Dir: Abbas Kiarostami
In a career that spans from the early 1960’s to the present day Abbas Kiarostami has marked himself out as one of cinema’s most maverick and individual voices. A constant innovator and challenger of cinematic norms, his filmography is so intimidatingly huge and so packed with notable titles that picking just one would be an impossibility. Instead, then, let’s pick three - Where Is the Friend's Home? (1987), And Life Goes On (1992) and Through the Olive Trees (1994), the three landmark movies commonly referred to as his Koker Trilogy. Each film is set in the Northern Iranian village of Koker and each is a wonderfully poetic evocation of life’s cycles told through stories of normal people faced with the fragile nature of mortality.

Jafar Panahi began his career as assistant to Kiarostami but shot to international acclaim in his own right when his directorial debut won the Camera D’or at the 1995 Cannes Film Festival. Coming from a script written by Kiarostami, Panahi’s first film is the hypnotically beautifully, achingly emotional and subtly subversive tale of seven year old Razieh, who wishes to buy a goldfish from a Tehran market place. While there, however, several characters will attempt to swindle her out of the money she received from her mother for the purchase. Panahi has since gone on to become one of his nation’s most popular and most controversial filmmakers. His constant troubles with the Iranian authorities finally came to a head in 2010 when he was imprisoned for six years for creating propaganda against the Iranian Republic, a decision decried by many in the international film community.

The last fifteen years or so has seen the rise of a number of brilliant female directors in Iran, and at the forefront is Samira Makhmalbaf. As the daughter of legendary director Mohsen Makhmalbaf, it was unlikely Samira would ever wish to do anything other than make films. Since her debut The Apple in 1998, she has quickly risen to be one of the most influential directors working in her country. Perhaps her best film, however, is her follow up, 2000’s The Blackboards, which concerns the effect of Saddam Hussein’s chemical bombing on the Kurdish citizens of Halabja during the Iran-Iraq conflict.

Tania Saleh to Perform at DRM on Aug 25

If you happen to be in Beirut this August then you shouldn't miss the chance of seeing singing sensation Tania Saleh perform at DRM (Democratic Republic of Music) in the Hamra District on August 25, 2012.

DRM a place where all the production elements are precise and measured and capable of delivering the highest standards in audio delivery and lighting. While constructing the place, a lot of attention was paid to the acoustics of the venue. A box in a box was built with special materials so that the sound is crystal clear with minimum reverberation. DRM is a concert hall that was conceived from this perspective: the perspective of music producers and musicians.

This is a 16-minute segment from the Special Summer edition of 'Arabology' (aired July 31, 2012) in which Ahmad Qousi discusses his first Ramadan in the USA.  Click on arrow below to listen.

arabology · Interview with Ahmad Qousi: His First Ramadan in USA (2012)

"Three Veils" is a film about three young Middle-Eastern women living in the U.S, each with her own personal story. Leila is engaged to be married, however as the wedding night approaches, she becomes less and less sure of how her life is playing out. Amira is a very devout Muslim, but is dealing with her deep repressions about her intimate feelings toward women. Nikki is acting out her promiscuity as she battles her own demons after a tragic death in the family. As the film progresses, all three stories unfold and blend into each other as connections are revealed between the three women.

Here are some pictures from the film's screening at the Roxie in San Francisco back in April of 2011.

Sae Lis' grew up in West Africa then lived and developed her musical talent in such places as France and Hollywood before making Beirut, Lebanon her home. It is in Beirut that she has released her first CD The Quest--a work (in English) that showcases the soulful, poppy, and remarkable talent of this solo female singer who cites as her musical influences such artists as Motown, Billie Holiday, Nina Simone, Erykah Badu, Amy Winehouse, and Sade.

"Among those years of discovery, I wrote THE QUEST" says Sae Lis' about her new album which has been received with much critical acclaim. The CD is out in all Virgin Megastores in Lebanon and online at itunes, amazon, cd baby and via the artist's web site www.saelis.com

Sae Lis' recently talked about her album during an interview (in English) that aired on June 27, 2012 on RADIO ONE, Lebanon 105.5 FM. Here is that intrerview:

The first single from The Quest is titled 'The Way You Treat Me' and was realeased along with this poignant video clip:

Email ThisBlogThis!Share to TwitterShare to FacebookShare to Pinterest
Labels: Sae Lis', The Quest


Podcast of the July 31 special summer edition of 'Arabology'--a radio show hosted by Dr. Ramzi Salti, Lecturer at Stanford University, showcasing (mostly alternative) music from the Arab world--is available for free downloading at the link below.


To download/save the podcast please go to http://radio4all.net/index.php/program/61804


To listen to the podcast with one click go to http://tinyurl.com/arabologysummer 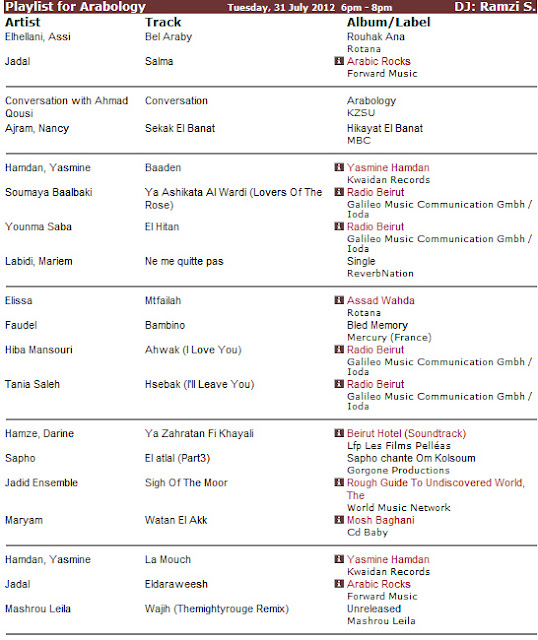 To download/save the podcast please go to http://radio4all.net/index.php/program/61804


To listen to the podcast with one click go to http://tinyurl.com/arabologysummer


Jordanian Olympic athlete Kareem Ennab (from Irbid)  got 5th place at the Olympics today in the 50m Freestyle, in just 24.09 seconds.