Dr. Ramzi Salti audio visual interview with Shahina Osseiran, daughter of late Lebanese Poet Jawdat Haydar (1905-2006), is now available online. Interview was recorded in October 2020 and features an in-depth discussion of Haydar's legacy, including poetry (in English and Arabic) as well a song by Lebanese singer Abeer Nemeh  عبير نعمة  that is based on one of Haydar's poems. See list of covered topics/poems below.
Watch the video below or at https://youtu.be/0BZC5yrZkNI
Watch at https://youtu.be/0BZC5yrZkNI
Here is a listing of the topics and poems that were discussed during this interview, including a song by Lebanese singer Abeer Nemeh that is based on one of Haydar's poems.  You can start at the beginning or click on time to the left of each listing below to go directly to that segment:
04:37 Verses about Arab Politicians (Deserts of Despair)
07:04 Excerpt from poem titled 'Beirut'
09:31 Discussion about Stanford event commemorating Jawdat Haydar
10:51 Discussion about Haydar's Arabic Poetry
10:54 Elegy for Jawdat's son Bassam
15:41 Song by Abeer Nehmeh titled 'Washwish' based on Haydar's Poem 'Wujudi La Wujud'
19:26 Arabic verses from Bassam's elegy + translation
23:15 Discussion about Kahlil Gibran ft poem.
25:56 Various events and tributes to Jawdat Haydar
35:47 Reading of Haydar's Poem "To a Friend" (recited by Ramzi Salti)
Watch this audio-visual interview at https://youtu.be/0BZC5yrZkNI
For more about Jawdat Haydar: http://jawdathaydar.org
Subscribe to Ramzi Salti's YouTube Channel at https://youtube.com/c/RamziSalti
- November 02, 2020 No comments:

The video segment below features Stanford Lecturer Dr. Ramzi Salti reading some of the Jawdat Haydar's own words (in Arabic) and reciting 3 of Haydar's poems (in English): "To A Friend" and "Lebanon" and "Mahatma Gandhi" (taken from the book 101 Selected Poems by Jawdat Haydar, Vantage Press, New York, 2006). This excerpt includes main video footage by Tadashi Moriguchi and close up video footage by Thoraya B. Edited by Ramzi Salti.  Watch below or at https://youtu.be/_FJ4y2q3fgI

Below are some photos from the event which was filmed in its entirety and and will be available soon elsewhere. 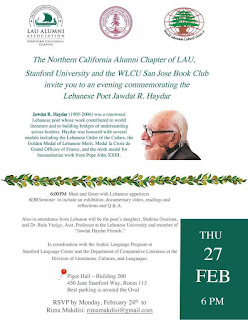 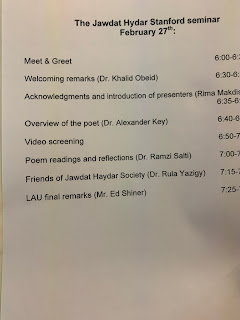 Below are some of poet Jawdat Haydar's works which were recited and read during the event: 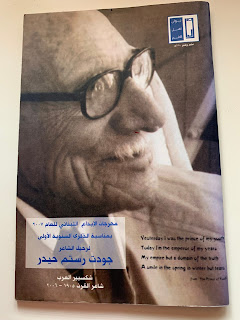 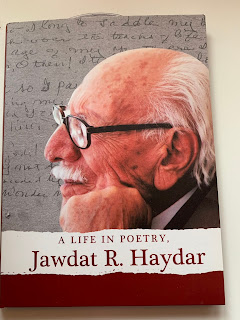 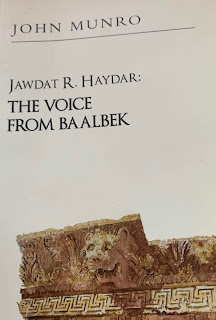 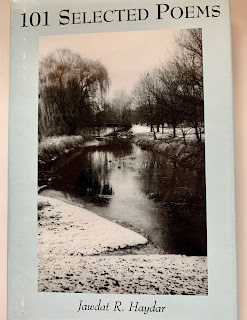