Jerusalem In My Heart, or JIMH, is the musical alias of Radwan Ghazi Moumneh, a Lebanese musician from Quebec where he has made a name for himself within the independent music scene of that city. Moumneh is known for mixing a love for music “with 16mm film projections and light-based (de)constructions of space.” His debut album Mo7it Al-Mo7 [Circumference of the Ocean] is set to be released on March 19 by Constellation Records and it marks the first official time that he has tried to translate his highly visual live show to a studio recording.

3. Yudaghdegh El-Ra3ey Walal-Ghanam [The Sheppard and the Sheep] Haunting tune with witty lyrics about glorifying the Sheppard instead of the sheep. (3:22)

**7. Amanem [Lamentation] Begins with the traditional ‘Aman’ lamentation then includes chants in Arabic that sound like a Muslim prayer. (8:53) 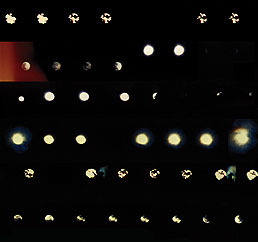