Although the Palestinian Hip Hop group DAM has been criticized for releasing this song and video clip during such tumultuous times in Gaza (see this link), this blogger thinks that the group's new release is still definitely worth a look.

The video clip was directed by Jackie Salloum (Slingshot Hip Hop) and broaches the issue of 'honor killings' and violence against women. It has been supported by UN Women (United Nations Entity for Gender Equality and the Empowerment of Women). DAM is joined in this recording by well known singer Amal Murkus and the clip, available in HD, also includes optional English subtitles.

Here is the clip followed by an English translation plus the credits:


**ENGLISH TRANSLATION:
Arabic script:  If I Could Go Back In Time (Suhel Nafar)

‏Before she was murdered, she wasn't alive
‏We'll tell her story backwards from her murder to her birth
‏Her body rises from the grave to the ground
‏The bullet flies out of her forehead and swallowed into the gun
‏The sound of her echo screams, she screams back
‏Tears rise up from her cheeks to her eyes
‏Behind the clouds of smoke, faces of her family appear
‏Without shame, her brother puts the gun in his pocket
‏Her father throws down the shovel and wipes the sweat off his forehead
‏He shakes his head, satisfied from the size of the grave
‏They drag her back to the car, her legs kicking
‏Like a sand storm, she's erasing her own tracks
‏They throw her in the trunk, she doesn't know where she is
‏But she knows that three left the house and only two will return
‏They reach the house; throw her to the bed in violence
‏"So you want run away huh?" they wake her with violence

‏Mahmood Jrere:
‏She dreams before falling asleep
‏We'll tell her story backwards, maybe understand
‏The clock hands move right to left
‏She reconstructs her steps as if she were lost
‏She sleeps prepared, money for the taxi
‏Plane ticket and passport under her pillow
‏Answer: leave the clothes in the closet; she plans to wear a new life
‏Question: what if they ask what the suitcase is for?
‏She went to bed, leaves table
‏Eats well, she must act today
‏Her nose stops bleeding, that's what they see
‏But it's a fresh wound; before they will beat her she will beat them
‏Her mom says "your life is like heaven"
‏She's right, if you taste the forbidden you better know someone is watching
‏Two hours before dinner, the phone hangs up
‏Her mom is shocked "the flight is delayed"
‏Phone rings

‏Tamer Nafar:
‏Before she answers, she isn't even asked
‏The story is like the logic in her life, all backwards
‏Her hands up in the sky, begging for help
‏Their hands up in the sky reciting the Fatiha (ceremony before marriage)
‏The calendar page moves one day back, the time is
‏Afternoon, the argument is over, her brother commands her
‏Blood flows from her lips to her nose
‏A sound of a fist, his hand jumps from her face
‏It's the first time in her life that she says "NO!"
‏Her mom announces happily "tomorrow you will marry your cousin"
‏If I look through the album of her life
‏I won't see a photo of her standing up for her rights
‏It's hard, the pages are stuck to my hand
‏Her past full of blood and tears
‏But we promise you, from her murder to her birth
‏Their expressions filled with anger as if someone announced a crime
‏"Congratulations, it's a girl"
‏The beginning.

Arabic script:  Freedom For My Sisters

The fifth episode of 'Arabology' (2/16/12) features my interview with Lebanese-American Stanford student and cheerleader Alix Farhat who discusses her Arabic classes at Stanford, her Lebanese heritage, and her role as a Stanford cheerleader. 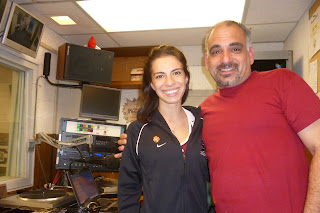 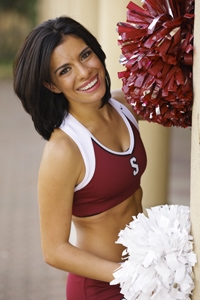