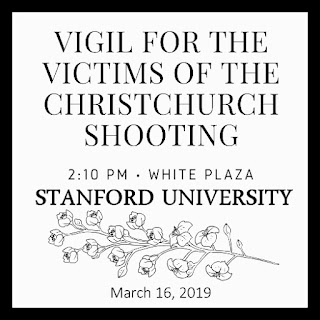 See my pics below and read more at this link. 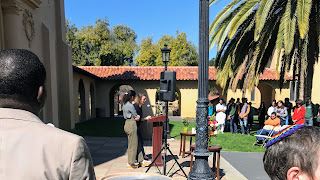 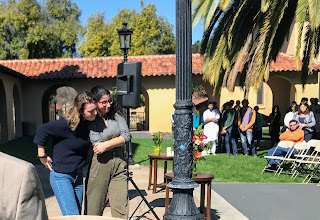 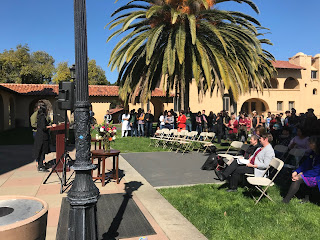 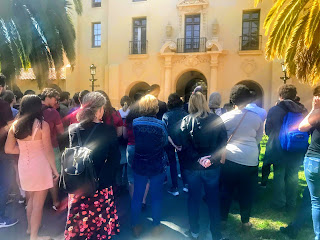 Read this Opinion Ed by Khaled Beydoun at THIS LINK.

Also read this piece in The Stanford Daily at  THIS LINK

Islam and Authors Book Reading program at ICCNC (Oakland, California) for this Saturday, April 13, at 5-7 pm with Peter Gottschalk, co-author of "Islamophobia: Making Muslims the Enemy", and "Beyond Hindu and Muslim" followed by audience Q&A session and book signing.
Program is in English and open to public.
For more information, visit www.iccnc.org or email info@iccnc.org or call 510-832-7600. 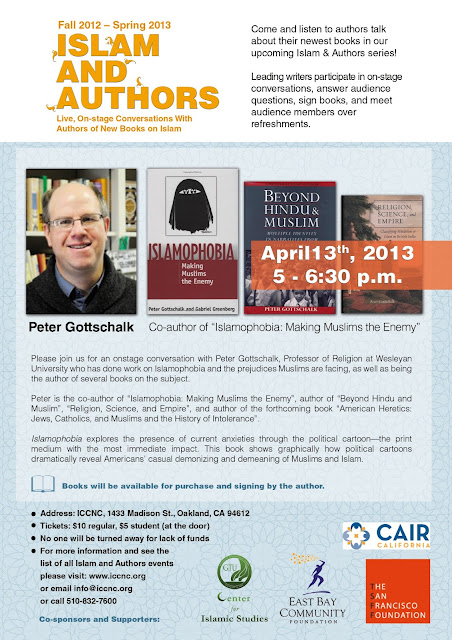 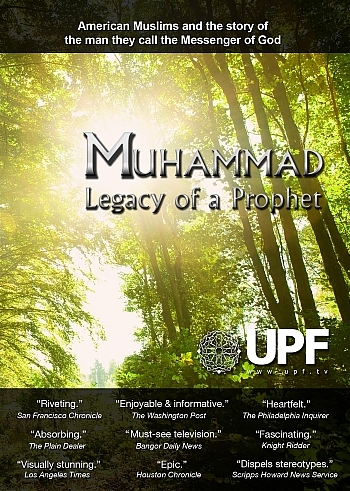 In our polarized climate filled with negative images and perceptions of Muslims, Unity Productions Foundation wants to provide its friends with a free resource to help counter misinformation and start a more positive dialogue about Muslims in America.

UPF’s film, Muhammad Legacy Of A Prophet, has already been viewed by over 150 million people worldwide, and is a proven tool to start meaningful dialogue while shattering stereotypes about Muslims. UPF is currently offering the film as a free resource both online and in DVD format, and I encourage you to watch the film for yourself.

Here’s how you can help UPF share their free resource and open minds:

Watch the film that aired on PBS and worldwide to a television audience exceeding 150 million people.

The 'Unity Productions Foundation' web site is at http://www.upf.tv/

Learning a Language, and Relearning a Country by Hugh Martin (NYT)

Below is a portion of a beautifully written essay by HUGH MARTIN titled "Learning a Language, and Relearning a Country" which was published in The New York Times on August 27, 2012.  If you like it, then I strongly urge you to read the whole piece at http://atwar.blogs.nytimes.com/2012/08/27/learning-a-language-and-relearning-a-country/

Quote from the New York Times: "For Hugh Martin, taking Arabic as a student almost six years after he had returned as a soldier meant coming to terms with his conditioned prejudices and fears."


Here is a small portion from Hugh Martin's piece in The New York Times (c).   See the complete piece at http://atwar.blogs.nytimes.com/2012/08/27/learning-a-language-and-relearning-a-country/

Running late to class in my third week of Arabic, I jogged up the angled staircase, past the drinking fountains, then turned the corner. My classroom was four doors down the hallway. As I glanced up, I almost smacked heads with a girl — all I saw were her large brown eyes dilated in front of me. Both of us jumped.

The encounter was eerily similar to the one I’d had that night in Sadiya: her body was covered completely in a black abaya and her head in a black hijab, and a purple veil hid her whole face, except her eyes and the upper bridge of her nose. In this hallway, it was common to see women in traditional Muslim dress because many of the Arabic classes took place on this floor. But for that second, not only was I startled from almost running into someone, but the sudden sight of her veiled face so close to my own caused a slight tinge of nervousness, even fear. In my conscience, I sensed that a vague “danger” signal was going off, and felt wrong for being so close to a woman dressed in traditional Arab garb.

“Excuse me,” I mumbled and stepped to the side. She looked to the ground and passed. Not surprisingly, within seconds, the fear vanished and I felt guilt for having it. My palms were sweating. It’d been more than six years since I’d returned. In some ways, I thought I’d grown, matured, simply gotten over this prejudice, this fear I had had that was so clear on that first raid in Sadiya when I came face to face — the first of many times — with an Iraqi woman in her own home. I knew this cautiousness and suspicion had been necessary in Iraq, but now, back in America, I had to trick myself out of it. This fear seemed to rise from the subconscious: an instinct, not a choice.

Seconds later, as I swung open the door and walked into class, the 20 or so heads of my peers glanced at me. Six or seven girls, including my teacher, looked up in the clothing they wore every day: heads covered with a hijab, only their faces visible. I avoided looking at them because I felt that this prejudice radiated off of me. The white, bearded male, the Iraq veteran — his suspicion and fear of traditional Muslim dress clear in his eyes. Obviously I imagined their thinking this, knowing this, but was it just all in my head?

Jihad, homegrown-terrorism, Sharia law, and mosques. Mention any of these terms and most people in America will associate it with Islam and Muslims. Say the word "Muslim Comedian" and most will think it is an oxy-moron. Can Muslims really be funny? Dean Obeidallah, and Negin Farsad are not only professional comics, they are also Muslim and are quite funny.

"It could be more challenging for us, they could give us hurricane names," says Dean Obeidallah. "Turn on the news, ‘Hurricane Mahmoud is coming! Run for your life, Mahmoud’s a killer’".

Born in New Jersey and living in New York City, Obeidallah, a former attorney, has found his calling as comedian. Addressing controversial issues and stereotypes through the lens of comedy, he has created a niche as an Arab-American comedian, working both the west and east coasts.

Not everything has been funny though. According to Obeidallah, and fellow comedian Negin Farsad have both felt a rise of Islamophobia.

According to recent polling, nearly half of all Americans admit to feeling some prejudice towards Muslims. Both comics felt inspired to do something about it. They figured that the best way to deal with intolerance is to make fun of it.

"We realized that most people who are against Muslims had probably never met a Muslim before," says Farsad. "So we thought we go to them and introduce ourselves."

Instead of performing at the cosmopolitan comedy club circuits like most comics, Obeidallah and Farsad along with fellow comedians Maysoon Zayid and Omar Elba organized a comedy tour called, "The Muslims Are Coming!" They took their act to southern Bible-Belt states, where some of the strongest feelings, actions and responses of Islamophobia have occurred.

"We really wanted to put our comedy where our mouth is," says Obeidallah. "Go to the areas where no comedians every venture to, no non-profit, or progressive cause would ever organize or engage in."

The inspiration for the comedians to embark on a tour like this came from the 1960’s Civil Rights movement. "Brave people like ‘The Freedom Riders’ and other civil rights groups went down to places like Mississippi, Alabama and Georgia to engage with people they did not understand, or have stereotypes with," says Farsad.

Armed with punch-lines and jokes, they drove from small town, to small town, throughout Georgia, Alabama, Florida and Tennessee performing free shows at local venues.

"It’s challenging now to have a Muslim last name, but there is one benefit- we are probably immune to identity theft," quips Obeidallah in an Alabama show. "Criminals want to take easy names that don’t get attention, not Abdul Musa Rahman Abdallah. I have an Arab-American friend born in the US whose first name is Osama. He can leave his driver’s license and credit cards in a crack house, no one wants to be him."

The Muslims found southern hospitality and provocative conversation with the people they encountered. They set up booths in town squares with banners and fliers passed around saying, ‘Ask a Muslim,’ inviting residents to ask them anything, even about their own identity as Americans.

"You know there’s only one kind of American, and that’s American," says a local resident to Farsad, to which she responded that she is an American Iranian. The resident replied, "If you want to be mainstream then you are no longer an Iranian American. You are an American."

After touring the south, the comedians took their act to Arizona, Utah, Idaho and various parts of the Midwest, with free shows and booths.

Parts of this article appear at http://www.nydailynews.com/news/national/lowe-hardware-pulls-ad-all-american-muslim-christrian-group-outcry-faces-outrage-article-1.990214


Lowe's Home Improvement has found itself facing a backlash after the retail giant pulled ads from a reality show called All-American Muslim about American Muslims. The show airs on TLC (The Learning Channel) Sundays @ 10/9c and, in my opinion, is eye-opening and respectful to Muslims as well as all Americans without advocating any kind of violence or alleged 'Islamic agenda.'  The reality show simply shows 5 American Muslim families leading their lives in Dearborn, Michigan--a Detroit suburb with a large Muslim and Arab-American population--and is both educational and entertaining.  Here is the show's trailer:


Lowe's stopped advertising on TLC's "All-American Muslim" after a conservative Florida group known as the Florida Family Association complained, saying the program was "propaganda that riskily hides the Islamic agenda's clear and present danger to American liberties and traditional values."


Calling Lowe's decision "un-American" and "naked religious bigotry," Sen. Ted Lieu, D-Torrance, told The Associated Press he would also consider legislative action if Lowe's doesn't apologize to Muslims and reinstate its ads. The senator sent a letter outlining his complaints to Lowe's Chief Executive Officer Robert A. Niblock.  It is now up to Lowe's to respond and they seem to sadly be sticking to their decision.

"The show is about what it's like to be a Muslim in America, and it touches on the discrimination they sometimes face. And that kind of discrimination is exactly what's happening here with Lowe's," Lieu said.

To to learn more about Islamophobia in America and what people are doing to stop it go to:
www.myfellowamerican.us