Ramzi Salti Moderates "In Between" Film Discussion at Stanford


The film was part of Stanford Global Studies' annual film festival featuring movies from all around the world. This summer's theme was “Friends & Family: Tales From Near and Far.” This screening was sponsored by the Abbasi Program in Islamic Studies.

Below is a video of the film discussion, moderated by Dr. Ramzi Salti, in which members of the audience expressed various points of view that contributed towards a much needed discourse that centers on women, gender roles and marginalized sexualities in the Middle East.

Watch the video below or at https://youtu.be/AB0Yw12qwJk 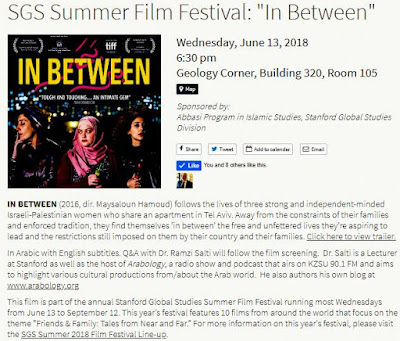 Musical Trailer for the film "In Between" (Created by William Sakhnini)