ReOrient Forum (Oct. 3 and 4) includes panels and presentations featuring artists, activists, and scholars from around the world.

“The annual cavalcade of short plays about the Middle East that has itself provided, in addition to a dependable variety of aesthetic pleasures, crucial space for public consideration and dialogue.” –Rob Avila, San Francisco Bay Guardian

“The evening offers two hours of the profound and the abstruse, the silly and the sublime. When you’re talking about the Middle East, you’re talking about a multiplicity of cultures and an infinite variety of voices, opinions and styles, and ReOrient offers a bold and broad sampling that give us a taste of that.” —Sam Hurwitt, The Idiolect

San Francisco, July 16, 2015—Featuring plays and artists from Armenia, Egypt, Iraq, Iran, Israel, Lebanon, Palestine, Syria, Turkey, United Kingdom, and the U.S., Golden Thread’sReOrient 2015 Festival and Forum will turn San Francisco into a mecca for innovative, spirited, and thought-provoking theatre from and about the Middle East. With plays, talkbacks, panels, roundtable conversations, a family show, and a recital for Arabic music lovers, ReOrient 2015 is an artistic celebration and political exploration of this transforming region for curious and engaged theatre lovers and those passionate about international themes.

The Festival culminates in a two-day ReOrient Forum featuring provocative conversations by artists, scholars, and activists from around the world. This year’s Forum features UC Davis Professor Sunaina Maira as Keynote Speaker, and presents panels on ideas of home and language for Palestinian artists around the world (organized by Theatre Without Borders), the intersection of sexual identity with Middle Eastern performance (organized by Shape-Shift Arts & Saboteur Productions), a multigenerational perspective of Iranian-American theatre (organized by Diaspora Arts Connection), and a panel on the future of Bay Area’s culturally-specific theatre companies (organized by Theatre Bay Area), amongst others. ReOrient Forum events are free and open to the public.

“Nowhere else in the US, and certainly not anywhere in the Middle East, will you be able to see such a diverse collection of plays from and about the Middle East on one stage,”Founding Artistic Director Torange Yeghiazarian explains. “But at the end of the day, ReOrient is more about us here in the U.S. than a changing Middle East that is thousands of miles away. Bay Area audiences of all backgrounds will find themselves reflected in these intelligent and warm plays.”

Evren Odcikin, Director of Marketing and New Plays, adds: “You know and are passionate about the Middle East? Join us in celebrating and exploring this diverse region and its people. Is all you know about the Middle East from mainstream media? Join us and experience a more complex and layered Middle East, with stories, conversations, and art from the people who live its reality.”

ReOrient, now produced every two years, is Golden Thread’s signature program and is a hugely ambitious undertaking for this intrepid theatre company. Chosen from submissions from all around the world, the festival of eight plays, selected by a committee of artists from around the country, is the artistic centerpiece of ReOrient 2015. This year’s festival will employ and feature more than 75 artists and participants and engage a large team of volunteers. The ReOrient Forum presentations are co-sponsored by many like-minded partners around the world, including Diaspora Arts Connection, Shape-Shift Arts & Saboteur Productions, Theatre Without Borders, Theatre Bay Area, and the University of San Francisco. This impressive network of artists and activists is essential in creating a unique and much-needed space for conversation and exchange with the Middle East, which is a core element of Golden Thread’s mission.

Golden Thread offers two passes that allows audiences to immerse themselves in the ReOrient experience and save: The All-Access Pass ($60) includes admission to all Festival and Forum events and the Series Pass ($40) includes admission to Series A and B of the Festival. Single tickets for the Festival are $22-$30. Single tickets to the Fairytale Players Double-Bill are $20 and free for children 12 and under. Single tickets to The Arabic Folk Song Recital by Saousan Jarjour are $20. ReOrient Forum panels and presentations are free and open to the public. Registration for ReOrient Forum is recommended. All passes, tickets, and registration are available at goldenthread.org.

ABOUT GOLDEN THREAD
Golden Thread Productions, founded in 1996, is the first American theatre company focused on the Middle East. We produce passionate and provocative plays from and about the region that celebrate the multiplicity of its perspectives and identities. Every play serves as an invitation to discover unexpected connections and engage in deeply moving conversations that last well beyond the life of the play. In our work, we are a developmental catalyst and vibrant artistic home to artists at various stages of their careers, and bring the Middle East to the American stage, creating treasured cultural experiences for audiences of all ages and backgrounds. goldenthread.org

REORIENT 2015 FACT SHEET:
ReOrient 2015 will turn San Francisco into a mecca for innovative, spirited, and thought-provoking theatre from and about the Middle East. Featuring plays and artists from Armenia, Egypt, Iraq, Iran, Israel, Lebanon, Palestine, Syria, Turkey, United Kingdom, and the U.S., ReOrient 2015 is an artistic celebration and political exploration of this transforming region and its people.

Lost Kingdom by Hassan Abdulrazzak, directed by Michael French
When a Lebanese-American FBI agent is called in to interrogate a fallen dictator, a twisted tango ensues that complicates black and white notions of good and evil.

Picking Up the Scent by Yussef El Guindi, directed by Evren Odcikin
Hisham, an archeologist, discovers an ancient perfume bottle in a war zone. As he digs deeper, his poet wife Nisrin questions if it’s worth risking his life for history.

Counting in Sha’ab by Emma Goldman-Sherman, directed by Erin Gilley
Life goes on for Mr. Hattab and a colorful cast of characters from his bustling Baghdad neighborhood despite a bomb going off in front of his grocery store.

Bitterenders by Hannah Khalil, directed by Manijeh Mohamedi
Maha’s Palestinian family shares their East Jerusalem apartment with an Israeli family, until a surprising letter changes everything—or does it?

Ceasefire by Ken Kaissar, directed by Evren Odcikin
Can a ceasefire allow Israeli and Lebanese soldiers patrolling the border to see each other as something other than enemy?

The House by Tala Manassah and Mona Mansour, directed by Sara Razavi
Kamal, a Palestinian-American scientist, and his philosopher daughter Alia put on a play and take an imaginary trip to his childhood home.

Songs of Our Childhood by Nahal Navidar, directed by Sara Razavi
Childhood friends, Mira and Sanaz, work as triage nurses during the Iran-Iraq War. But it’s their ideological battles that threaten the peace inside the hospital.

Turning Tricks by Silva Semerciyan, directed by Erin Gilley
Even slavery has evolved in wealthy and genteel Europe. But the players are not who you would expect.

The Fairytale Players Double-Bill
WHAT: Princess Tamar Rescues Nazar the Brave and 21 Days That Change the Year: Two beloved family-friendly productions, inspired by Iranian and Armenian fairy tales will be presented in one afternoon.
WHEN: Sun, Oct 4, 2015, at 2pm
WHERE: Z Space (450 Florida St, San Francisco)
goldenthread.org


REORIENT 2015 FORUM
WHAT: Join us for provocative conversations by artists, scholars, and activists from around the world. This year’s Forum features UC Davis Professor Sunaina Maira as Keynote Speakers and presents panels on ideas of home and language for Palestinian artists around the world (organized by Theatre Without Borders), the intersection of sexual identity with Middle Eastern performance (organized by Shape-Shift Arts & Saboteur Productions), a multigenerational perspective of Iranian-American theatre (organized by Diaspora Arts Connection), and a panel on the future of Bay Area’s culturally-specific theatre companies (organized by Theatre Bay Area), amongst others.
WHEN: Sat, Oct 3 & Sun, Oct 4
Panels and presentations will take place 9am–6pm each day.
WHERE: Z Space (450 Florida St, San Francisco)
TICKETS: FREE and open to the public

To register and for details, please visit goldenthread.org/forum.
at August 30, 2015 No comments:

The Arabian Shakespeare Festival is presenting 4 Short Plays created with inspiration from one of Shakespeare's Sonnets or the Poetry of Sidi Abderrahman el Mejdub and Abeliziz Al Magrouhi (arab poets from the same period). Actors and directors will put the play up with well under 10 hours of rehearsal!

Oud Master Ramy Adly will be in concert at the Kennedy Center on August 28th, at 6pm,  His performance aims at highlighting the Oud instrument  and the way it has always featured within the canon of Arabic/Middle Eastern music. 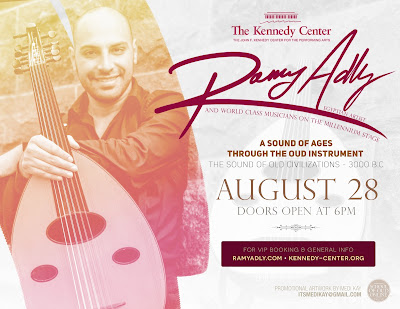