Rania Kurdi is back with a new season of The Rania Show called Ma3ZOOM which she is making available via her YouTube Channel. Starting on April 24, 2020--and for the entire month of Ramadan--she will be releasing a new episode every night at 8:30 pm (Amman time) where she will resurrect her iconic characters who are funnier than ever! Watch trailer below or at https://youtu.be/P27rJc70g6c

The premise behind this season's episodes is that each of her beloved 5 characters--Um Rami, Ola, Ghalia, Arwa, and Sasha--will be attempting to learn a new skill via Zoom by hiring real life experts from various fields--from sports to learning English.

The playlist includes all the episodes that have aired thus far and is being consistently updated; click on the icon to the top right of the screen below to watch all episodes in succession. 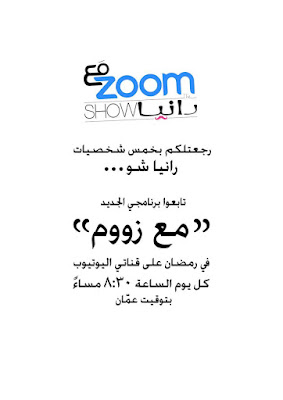 
This Ramadan (July 8-August 7, 2013) Arabic TV stations have unveiled a multitude of special shows and series that bank on a record number of viewers during this holy month.  Roya TV is no exception and has premiered a daily comedy show starring Jordanian actress/singer/TV host Rania Kurdi رانيا الكردي who changes personalities every day and plays everything from a conservative housewife to a Russian immigrant in Jordan who flashes both her clothes and sexuality.  In many ways, this seems reminiscent of British comedienne Tracey Ullman who, over the past 2 decades, has made a career out of creating and developing characters that soon take on lives of their own.

The 5 characters that Rania Kurdi has created are different from each other yet are all part of the fabric of many Arab societies.  The characters are pictures above (from left to right) in this order:  Um Rami, an athletic housewife who wears the hijab and thinks that her son Rami is above all other kids; Ola, an allegedly Russian immigrant with an exotic accent and a loud sense of fashion; Ghalia, an 'upper crust' housewife who spends massive amounts of money on/for herself in order to impress the neighbors while being half broke in reality; Arwa, a gossipy secretary at a doctor's office who is flirty and desperate to get married; and Sasha Abi Najmeh, a Lebanese singer (using the term loosely here) who has undergone many plastic surgeries and is as superficial and egocentric as she is talent-less.

In this segment from Episode 5 of The Rania Show  (http://youtu.be/Fjexncbr5iU)  Rania Kurdi plays the part of an allegedly Russian artiste living in Jordan whose name is Olla.  She speaks Arabic with a Russian accent and, in this clip, is being interviewed by a Jordanian radio hostess whose husband, it turns out, is having an affair with Olla herself.  Also worthy of mention is that the actress playing the broadcaster switches from her 'truly' Jordanian accent off air to a fake, deliberate Lebanese accent during the interview in an attempt to sound more 'sophisticated.'


Rania Kurdi is a Jordanian singer, broadcaster and actress who plays the guitar, writes poetry, dances, and paints.  She traveled to Britain in 1991 to train for professional representation in the Barnett College of Art and then joined the Guildford School of representation.  In 1998 she returned to Jordan and worked in theater before going on to produce her own shows for Jordan Television.  Fame quickly came via her musical and acting talents and she even hosted the popular Superstar show on Arabic TV for 2 seasons.

On The Rania Show, Rania Kurdi does not just play the part of a character; she literally becomes that character and Arab viewers will undoubtedly have a look of humorous recognition when they watch her, thinking "Hey I know someone just like that!"

Case in point is 'Sasha Abi Najm'--a character that Rania Kurdi created to represent some of the botoxed, plastic, often talentless female singers who often come from Lebanon (hence, her Lebanese accent) and whose ego is fueled by the media's fascination with them.  In this clip, sung by the fictitious Sasha Abi Najm, Rania Kurdi sings a song titled "Me Me Me" in which, no surprise, the singer is praising herself (http://youtu.be/uMBkn_a69pg):

Here are some more hilarious segments from The Rania Show taken from episodes that have aired thus far this month.  Although these skits don't have English subtitles it is still easy for viewers to note Ms. Kurdi's amazing talent of impersonation.

Playlist for the Rania Show episodes that have aired thus far:

For more about 'The Rania Show' see https://www.facebook.com/TheRaniaShow