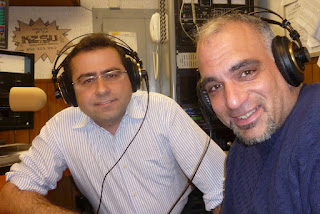 The 9th episode (First Season Finale) of 'Arabology' (3/15/12) features my interview with Dr. Marwan Hanania, Visiting Scholar for the Abbasi Program in Islamic Studies at Stanford University who showcases the history of Amman, Jordan and discusses the notion of an Arab Spring in Jordan and the region.

'Caravan': A Radio Show from Montreal on Arab Art, Culture and More

Rania Arabi is the host of a radio show in Montreal called Caravan on Arab art and culture, and social and political issues. Her show airs on Wednesdays 14:00-15:00 on CKUT 90.3 FM (Montreal) and includes great music, intersting commentary and wonderful interviews. It also streams live at http://ckut.ca/c/

To hear Rania's show, simply go to http://www.ckut.ca/cgi-bin/ckut-grid.pl then click on 'Caravan' or select it from the list. You will then be able to enjoy previous epsiodes of the show with just a click.

You can also listen to old Caravan podcasts directly at this link:
http://ckut.ca/cgi-bin/ckut-grid.pl?show=3%2C14%3A00&action=showaudio

The 8th episode of 'Arabology' (March 8, 2012) features personal interview with Ahmed Benchemsi, visiting scholar at Stanford University's Program on Arab Reform and Democracy at the Center on Democracy, Development and the Rule of Law and publisher and editor of Morocco's two best-selling newsweeklies TelQuel (French) and Nishan (Arabic), which he founded in 2001 and 2006, respectively. Ahmed's magazines have been repeatedly cited by major media such as CNN, BBC, Al Jazeera and more, as strong advocates of democracy and secularism in the Middle East and North Africa.

Show also includes interview with Dabke dancer/trainer/singer Ayman El Saabi (who sings live on the show) plus a discussion with Stanford student of Arabic Joe Delgado.