Label: World Music Network
CD will be released in March 2013 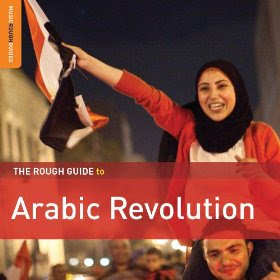 This double CD compilation showcases Arab singers and musicians whose songs have provided the ‘soundtrack’ to the Arab Spring. CD 1 mainly features Egyptian, Tunisian, Libyan and Palestinian singers while CD2 strictly showcases the music of Ramy Essam, a young Egyptian singer who is known for playing his guitar and singing against the Mubarak regime in the streets of Cairo, leading to his arrest and torture. His best known song (oddly not included in this compilation) is “Irhal” [Depart] in which Mubarak is urged to resign. That track is referred to as the anthem of the revolution.

2. Emel Mathlouthi/ Kelmti Horra (My Word Is Free): Tunisian songstress whose new album was fueled by the Tunisian revolution.

3. El Tanbura/ Heela Heela: El Tanbura is a collective of veteran Egyptian master musicians, singers, fishermen and philosophers who have been custodians to some of Egypt’s oldest folk melodies at their home in Port Said.

5. El General Feat. Mr Shooma/ State Of The Nation: El General is the Tunisian rapper whose song to the then President of Tunisia went viral on the net, igniting and contributing to the ensuing revolt.

7. Sami Yusuf/ I'm Your Hope: Sami Yusuf sings this track in English and classical Arabic about cherishing the young men and women who rose up against their regimes.

8. Ibn Thabit/ Calling The Libyan Youth: Libyan singer who dedicates his songs to the courage of Libyan women.

**9. May Matar/ Metlak Mesh 3ayzin: May Matar is a Lebanese singer whose song(s) rebels against patriarchy, sexism, and the subjugation of women.

12. Mustafa Said/ Ya Masr Hanet We Banet: Longest track on the CD (over 10 min long) by an Egyptian singer who plays the Oud and laments the loss of human life while proclaiming his love for Egypt.

2. “Action” has guitar plus other instruments about massacres in Egypt.

4. 3oksha: Fast track with electric guitar, back vocals, very different from other songs on this CD.

10. El-Masala: Title means “The Matter at Hand.” About the media and dictators. Hard rock sound.

11. Bta2ty Acoustic: This is the acoustic version of track 5 above.

**13. El-Ga7sh Wel 7omar: Title means “The Mule and the Donkey.” Song about politicians.

14. Nafadt: Title is in colloquial Egyptian and refers to “forsaking” order, human rights, and the Egyptian Constitution.

15. Tartoor: Title refers to a person who is easily manipulated to serve others. Demeaning term. Smooth sounding track.

**16. Al-Masry Al-Asly: Title means “The Real/Original Egyptian.” Just Ramy Essam and his guitar singing about being proud of being Egyptian.