My next radio guest spot on Stanford's KZSU 90.1 FM's "Lunch Special" Show is scheduled for Monday October 4th from Noon - 1 PM. It will air live on KZSU Stanford 90.1 FM and stream live at http://kzsulive.stanford.edu

This time around, I am planning a special tribute to Fairuz (who, at age 75, is releasing a brand new album) and I will be premiering brand new tracks from some of the Arab world's most promising new talents--from Tania Kassis (aka La Soprano du Liban) and Zeid Hamdan (former member of the ultra hip band Soapkills) to Egyptian superstar Tamer Hosny and Tania Saleh (whose vocals and musical arrangements have to be heard to be believed). These budding musicians will blow you away with the innovative, fresh and extremely addicting music that they have been releasing--songs that combine Eastern rhythms with Western influences and sung in both English and in Arabic.

If you would like to listen to some of my earlier podcasts on KZSU 90.1 FM's "Lunch Special" Show, then please feel free to check out the links below. While listening to these podcasts, you can also browse my playlists and read about current happenings on the Arabic alternative music scene.

Fairuz Live in Concert at BIEL in October 2010 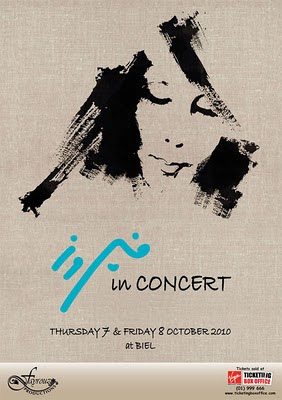 The tickets are selling fast, as reported in this report from Arabic TV which shows the fans who waited in line for hours--even days--to get tickets.

Egypt or Lebanon? Cairo or Beirut? Which location has contributed more to the world in terms of culture and history? In this duet, Egyptian singer Amina argues that Egypt, the Pharoahs, The Pyramids, Om Kulthum, and Abdel Halim Hafez prove that Cairo reigns supreme while Lebanese singer Hesham El Haj attempts to highlight Lebanon's culture and history by highlighting the Phoenicians, Baalbeck, and Fairuz's music. The result of this cultural standoff between Amina and Hesham? Watch the video clip to find out :)

NPR Article about Fairuz and the Royalty Dispute

by JACOB GANZ
July 30, 2010
The Lebanese singer Fairouz is the focus of protests around the world since a court in Beirut banned her from performing one of her signature songs last month due to a dispute over royalties. She was set to perform the song "Ya'ish Ya'ish" at the Casino du Liban until the children of her late husband's brother stepped in.
Ian Black of the Guardian explains the dispute:

Many of Fairouz's works were co-written and composed by her late husband Assi al-Rahbani and his brother Mansour. When Mansour died, his children filed a suit against Fairouz, triggering a court order stopping her performing material that involved his contribution.

Mansour and Assi are popularly known as the Rahbani Brothers. Fairouz, which means "turquoise" in Arabic, is the stage name of Nihad Haddad. The 75 year old singer is an icon in the Arabic-speaking world, and as NPR's Jamie Tarabay pointed out in her50 Great Voices profile of the singer, Fairouz has fans around the world. Protests against the action taken by Mansour's children have popped up as far away as Australia, the Guardian says, and her cause has also been taken up by fans on Twitter.
In her profile, Tarabay writes:

The singer's career began as Lebanon gained independence, linking her inextricably to the country's history. During Lebanon's bloody civil war, when Beirut split in two in the 1970s, Fairuz refused to take sides. She decided not to perform in Lebanon at all, instead touring exclusively overseas. For Fairuz, music was her political activism, and the war-weary Lebanese clung to it. They latched on to one song in particular during this desperate time. It's called "Behebak Ya Libnan," or "I Love You, Lebanon," and it's still beloved in Lebanon today.

The video above shows Fairouz performing "Behebak Ya Libnan" at the Damascus International Festival in 1976. The credits hereindicate that the song was composed by the Rahbani Brothers, which would land it on the list of songs Fairouz isn't allowed to perform without permission from — and presumably remuneration for — Mansour's children. (Watch quickly. It stands to reason that they might be able to get it pulled from YouTube, as well.
at September 13, 2010 No comments:

Fairouz banned from performing – ever
Is this the end of the Arabic music legend’s career?
By Rachel McArthur
Published Sunday, July 25, 2010

Fairouz has reportedly been banned from performing in Lebanon and abroad – leaving the Lebanese singer’s professional career in jeopardy.
However, the news has outraged the Arab entertainment world, with many publicly supporting the star in what they are calling an “unfair” decision.

According to numerous Arabic media reports, the world-renowned superstar has been prevented from performing thanks to a lawsuit filed by Osama and Marwan Rahbani – sons of the late composer Mansour Rahbani – who worked with Fairouz.
They claim that the singer owes the brothers – who are heirs to Mansour – royalties from previous performances of material owned by Mansour.

The legendary performer’s career kicked off in the 1950s, after she met Mansour and Assi Rahbani – AKA The Rahbani Brothers – who composed and wrote most of Fairouz’s songs.
The singer went on to marry Assi in 1955.

Assi passed away in 1986, whilst his brother died in January of last year.

Since the death of Mansour, Fairouz has apparently been involved in numerous financial problems with Osama and Marwan.

Meanwhile, a host of Arabic celebrities are scheduled to participate in a peaceful protest in Beirut in support of Fairouz July 26.
Some of the names mentioned in reports include Egyptian actress Elham Shaheen, and Arabic singer Tamer Hosney.
at September 13, 2010 No comments: