Watch interview above or at https://youtu.be/Mg4vi4mwHlE

Recorded on Jan 24, 2023
Ramzi Salti interviews Omar Offendum about his Stanford events (on January 28, 2023) where he was joined by Oud Virtuoso Ronnie Malley for a show titled "Coast to Coast: Reflections from Al Andalus to Los Angeles."

Syrian American rapper and poet Omar Offendum and Palestinian American multi-instrumentalist maestro Ronnie Malley weave stories of the past, present, and future as they trace the influence of Al-Andalus and Arabic-speaking peoples on music and culture, from New York City's Little Syria to the birth of California Surf Rock. 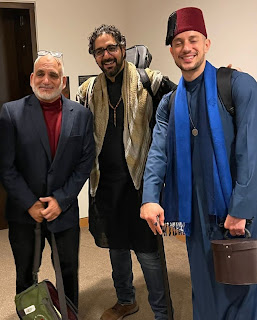 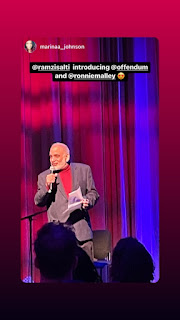 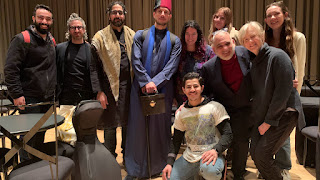 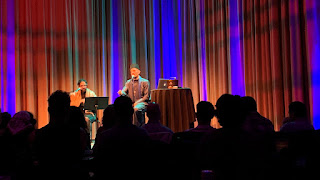 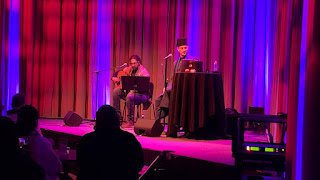 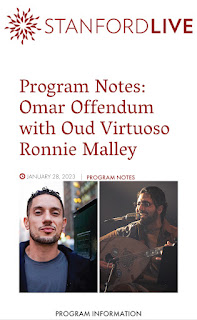 Between the release of their first, self-titled album in 2012 and their second, Taraf Al Khait, in 2016, El Morabba3 caught the transformative spirit of a revolutionary generation with their trenchant indie-rock sound and lyrics. Now, after restructuring the band and moving from Amman to Berlin, founding singer/songwriter/bassist Muhammad Abdullah and the music producer and sound artist Basel Naouri are taking El Morabba3’s earlier aesthetic evolution into a new direction.

Departing from the raw post-rock energy of the first album and the polished instrumental/electronic fervor of the second, the artists have taken a deep dive into experimentation with electronic sound and storytelling. This new direction is more than evident in “Al Wuhoosh,” a wholly electronic track whose dramatic and disquieting sound is pulled off by Basel Naouri’s sonic architecture, with layered vocals and synth cadences quilted by a shrewdly mixed bass and kick. Listeners familiar with the evocative power of Muhammad Abdullah’s lyrics will be happy to find it here again in full force. However you interpret the song’s meaning, “El Wuhoosh” is sure to resonate with anyone who has ever had their world plundered by monsters, and who, like the singer, has ever wished for restoration: “If there’s still some soul in you, / Hey soul, bounce back.”

El Morabba3’s video of “El Wuhoosh” reimagines these sonic and lyric tensions in stark black-and-white – recalling conventions of film noir and horror, fairy tales and graphic novels – while generating a vision of a disintegrated subject, as if to ask: “Are we our own monsters?” Shot on location in Brandenburg, Germany, and created in Berlin with an international team of visual and time-based media artists, the video is another emblem of El Morabba3’s new artistic orientation.

For more information about El Morabba3 in English and Arabic, access to tracks, and concert dates, please visit: https://elmorabba3.com or contact : Mohamed Aser: aser@altorient.com
Check out El Wuhoosh Music Video below or at https://youtu.be/U_dMhDsUMOQ

يمكنكم الآن الاستماع إلى المقابلة التي أجراها معي برنامج (صدى الاغتراب) من إذاعة جبل لبنان بتاريخ 24 يناير 2023 عبر الرابط التالي
Dr. Ramzi Salti interviewed in Arabic by Vatché Akarakian for his amazing radio program on Radio Mt Lebanon where we spoke about my career as a University Lecturer, Podcaster and writer. Listen to the segment below or at this link.
Listen at https://www.listennotes.com/podcasts/interviews-on/interview-dr-ramzi-salti-01-cVMKNeBW6ut/
at January 26, 2023 No comments:

Omar Offendum with Ronnie Malley at Stanford this Saturday January 28

Omar Offendum with Oud Virtuoso Ronnie Malley at Stanford
Coast to Coast: Reflections from Al Andalus to Los Angeles
Saturday January 28, 2023 at The Studio (Stanford) 7 pm and 9 pm
Info and tickets at this link
NEW!!!  Listen to Dr. Ramzi Salti's Interview with Omar Offendum below or at https://soundcloud.com/arabology/omaroffendum2023
arabology · Ramzi Salti Interviews Omar Offendum (Promoting Jan 28, 2023 Stanford Event)
Syrian American rapper and poet Omar Offendum and Palestinian American multi-instrumentalist maestro Ronnie Malley weave stories of the past, present, and future as they trace the influence of Al-Andalus and Arabic-speaking peoples on music and culture, from New York City's Little Syria to the birth of California Surf Rock.

Ronnie Malley is a multi-instrumentalist musician, theatrical performer, producer, and educator. He is executive director of Intercultural Music Production in Chicago and a teaching artist with Chicago Public Schools. Ronnie's theater credits include the Broadway musical tour of the Tony Award Winning The Band's Visit and Disney's The Jungle Book. He also performs with the music groups Allos Musica, Apollo’s Fire, Surabhi Ensemble, and more.

For info and tickets:
https://live.stanford.edu/calendar/january-2023/omar-offendum-oud-virtuoso-ronnie-malley
at January 24, 2023 No comments:

Video recording now available of Dr. Ramzi Salti conducting a Q&A session with Lebanese Director Oualid Moueness following the screening of his film 1982 on July 31 at the Opera Plaza Cinema in San Francisco.
Watch below or at https://youtu.be/Z7nEOT3i2ts
The film stars Lebanese superstar Nadine Labaki (Capernaum, Caramel) and Mohamad Dalli (in his acting debut) alongside an extraordinary ensemble cast of professional and non-professional actors (In Arabic and some English, with English Subtitles).
1982 is a life-affirming coming-of-age tale set at an idyllic school in Lebanon’s mountains on the eve of a looming invasion. It unfolds over a single day and follows an 11-year-old boy’s relentless quest to profess his love to a girl in his class. As the invasion encroaches on Beirut, it upends the day, threatening the entire country and its cohesion. Within the microcosm of the school, the film draws a harrowing portrait of a society torn between its desire for love and peace and the ideological schisms unraveling its seams.
In his debut feature, writer/director Oualid Mouaness delivers an ode to innocence in which he revisits one of the most cataclysmic moments in Lebanon’s history through the lens of a child and his vibrant imagination. The film demonstrates the complexities of love and war, and the resilience of the human spirit. Watch the film trailer at at this link.
The film screened at OPERA PLAZA CINEMA located at 601 Van Ness Avenue, near San Francisco's Civic Center, San Francisco, CA, 94102.
at January 17, 2023 No comments: