BRIEF BIOGRAPHY OF SAPHO:
Born in 1950 to Jewish parents in Marrakech (Morocco), Sapho (real name Danielle Ebguy) emigrated to France when she was 16.  By 18, she was living on her own in Paris, taking acting lessons, playing guitar and singing on the streets. A short time later, a musician friend convinced her to audition for famed music school, Le Petit Conservatoire de Mireille. Sapho soon abandoned her acting studies in favor of music. Her first LP, Le Balayeur du Rex, was released in 1977 by RCA.

In 1985 Sapho realeased Passions, passons, which saw her leaving the rock sound of her previous albums to embrace the Middle Eastern sounds she had grown up with, leading to a series of concerts at Le Bataclan (Paris). There she began performing her arrangements of songs made popular by the great Egyptian singer Um Kulthum.  Here she is singing Um Kulthum's 'Al-Atlal':

Sapho published two novels and was involved in making a film about the children of the Intifada, In 1992, she focused on the music of Umm Kulthum, releasing a full album of that material and touring the world, even performing in Jerusalem in 1994.

Her next album, Jardin Andalou (1996), blended rock with Arabic and Andalusian elements. This was followed by Digital Sheikha, a more electronic-based album with Pat Jabbar and the contribution of Bill Laswell, for the Swiss label Barraka el Farnatshi.  In 1999, La Route nue des hirondelles was released along with her third novel.  She transformed La Route nue des hirondelles into a stage show, which she toured for the next couple of years, while also continuing with the Umm Kulthum material.


Sapho worked and performed in Bagdad, Jerusalem, Nazareth and Gaza before recording Orients (2003) with a classical orchestra made of Jewish, Muslim and Christian musicians.  In 2005, accompanied on stage by a flamenco guitarist, she focused on material by famous French songwriter and composer Léo Ferré. In 2006, the album Sapho chante Léo Ferré – Ferré Flamenco followed, featuring the song 'Avec le temps' translated into Darija (Moroccan Arabic dialect). Her next album, Universelle, in French, English and Darija is a kind of travel through all of her influences, from blues to traditional sounds. (Wikipedia and other sources) 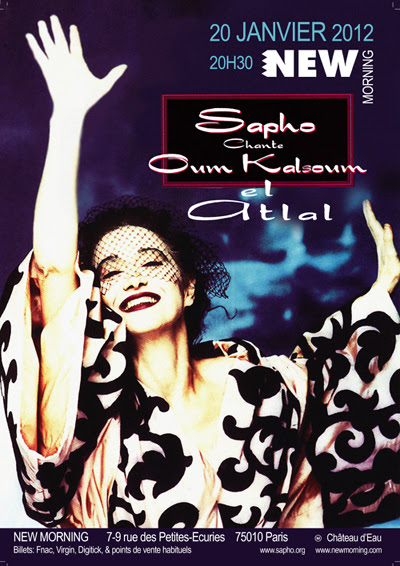 For more info on Sapho, see her official site at http://www.sapho.org/