Changing Egypt’s Identity One Picture at a Time! (Great Moments in Public Signage 2) 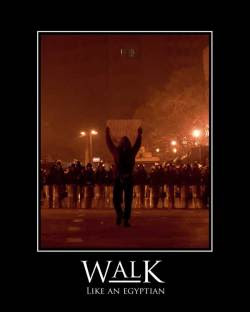 Recently, an image circulated on social networks and the internet at large that spread like wild fire – “has gone viral,” as one Facebook user comments.

Shown left (above), the image documents the recent Egyptian protests. At first glance, it seems to simply make a political commentary. The sentence “Walk like an Egyptian,” centered below an image of demonstrators, calls for solidarity with Egyptians. A closer analysis, however, reveals how truly revolutionary (pun intended) its message is.

“Walk like an Egyptian” became iconic with the release of the 1986 hit by the Bangles (although one can argue that the depiction of the walk in American pop culture dates back to 1947, with the release of a Bugs Bunny cartoon titled “A Hare Grows in Manhattan,” where the wacky wabbit demonstrates to his audience how Egyptians walk). The walk mirrored early wall paintings in Egyptian pyramids. The sentence, thus far, indexes an exotic notion of Egyptians, an orientalist view, as Edward Said claimed in his book Orientalism. American pop culture, Said would argue, constructed an identity for Egyptians, representing them as “the other.”

But what is unique about the way meaning attached to this sentence is that Western pop culture constructed a semiotic meaning rather than a semantic one. Meaning in this phrase is semiotic rather than semantic because the sentence communicates a metaphor that has a unique association to one culture. In other words, the only way “Walk like an Egyptian” would achieve its intended meaning is through familiarity with American pop culture because it is there where meaning has been assigned.

Consider, for example, the sentence “Walk like an American.” There’s no preconceived notion of how Americans might walk and therefore there’s no symbolic association to its meaning. The sentence’s meaning, in this example, is limited to its semantic value. Conversely, the word “man” in “Walk like a man / Talk like a man” – lyrics from 1979 hit by the Wanderers – are not unique to a culture and thus index an identity that is shared more widely. Meaning here would not be ambiguous if the phrase was translated to another language such as Arabic, for instance, because Arab cultures index a male’s walk in a manner similar to other cultures. However, if the poster used the Arabic translation إمشي زي المصري (imshi zayi el-masri) of “Walk like an Egyptian,” the meaning of the sentence would remain ambiguous to Arab audiences because Arab cultures do not share the same preconceived context implied by the West.

This would probably be true in other languages where semiotic meaning has not been assigned culturally.

So until now, “Walk like an Egyptian” signified “otherness.” This time, however, the sentence is once again invoked but is assigned a new cultural symbol – the notion of solidarity. Solidarity is a basic human tendency – a need to integrate and belong. Alterity as a characteristic representing Egyptian is now replaced by membership: they are no longer the “other,” but instead a member of the larger familiar social group of humans (as apposed to the unfamiliar and exotic civilization). Walking like an Egyptian now means walking with the powerful, rather than the “other.”

What makes this revolutionary, and somewhat ironic, is this shift in meaning could only be reconstructed using the language of the dominant “orientalist” culture that originated it. Let’s face it, a photo of demonstrators alone, or with any other sentence such as “Walk proud!” or “Viva la revolution!” would not have had as positive of a contribution to Egyptian identity as this poster has. At best, these sentences would have simply blended Egypt and its people into the common backdrop we refer to as the Middle East (with its turmoil, war, demonstrations, etc.). Consciously or not, the creators of this poster used image and language brilliantly and managed to create a new identity for Egypt and Egyptians.

If you want to know more:
The discovery of King Tutankhamen in 1922 received world-wide press and was the West’s first exposure to ancient wall paintings where the two-dimensional representation of Egyptians’ walk entered Western pop culture. However, Warner Brothers’ animated depiction of it in 1947 was most likely the earliest precursor to assigning a unique cultural identity to the sentence “Walk like an Egyptian,” which has spread since and gained momentum with the Bangles’ hit.
Orientalism, and the title of Said’s book, is a term used for the imitation or depiction of aspects of Eastern culture in the West by Western writers, designers, and artists. Edward Said was one of the most influential cultural critics and was credited for coining the term. His ideas impacted research on identity, gender, indexicality, representation, and many related areas of cultural and social research. For more on the works of Edward Said, see Yasmin Ramadan’s “A Biographical Guide to Edward Said.” For more on orientalism, see his article in A Critical and Cultural Theory Reader.
David Chandler’s Semiotics for Beginners summarizes concepts such as indexicality and semiotics, and he explains how they relate to identity and provides further readings.
The visual design of the image is probably a reference to Successories posters, a staple of American workplace decoration and a frequent target of Internet satire.