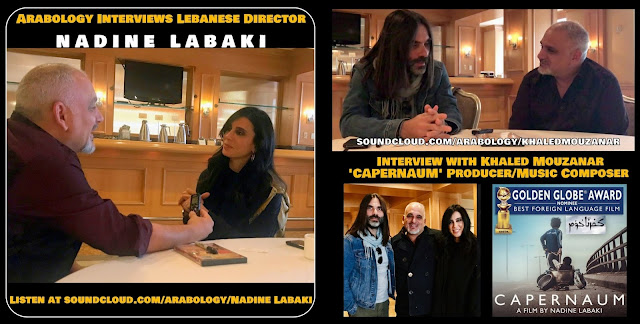 I am proud to share my radio interviews with (1) Lebanese Director Nadine Labaki and (2) Producer/Musical Composer Khaled Mouzanar who composed the Capernaum كفر ناحوم soundtrack as well as the score for Labaki's previous films Caramel and Where Do We Go Now?

This interview was recorded in San Francisco on November 18, 2018 while Labaki and Mouzanar--who are married in real life--were promoting the film for Sony Pictures Classics. The film is set for its U.S. theatrical release on on December 14, 2018.

My interview with Nadine Labaki: https://soundcloud.com/arabology/nadinelabaki

This film has just been nominated for a Golden Globe award and has been selected as a candidate for the 2019 Oscar race. It also won the Prix du Jury at the 2018 Cannes Film Festival as well as "Best Foreign Language Film" at the 24th annual Critics' Choice Awards.

For more info about the film, see https://sonyclassics.com/capernaum/

The latest episode of the Emmy Award winning TV series The Migrant Kitchen (aired on December 5, 2018) highlighted the cuisines of two Palestinian women whose culinary skills have long received much critical acclaim in the San Francisco bay area. The episode was titled Man'ouche منقوشة  and showcased Chefs Reem Assil and Lamees Dahbour (aka Mama Lamees), both of whom have long attempted to use food to bring their homeland closer to Western tolerance and acceptance.

You can also read this article about the show (featuring quotes by Dahbour, Assil, and Salti) at THIS LINK

"The Migrant Kitchen" is an Emmy®-winning food series that explores California’s booming food scene through the eyes of a new generation of chefs whose cuisine is inspired by the immigrant experience. Visit the kitchens of those who have transformed the culinary landscape of the state, combining traditional ethnic cuisines and a fusion of new flavors and techniques to make it a food capital of the world. "The Migrant Kitchen" is produced in association with Life & Thyme.

For more info about the show, please see https://www.kcet.org/shows/the-migrant-kitchen