My interview with Denmo Ibrahim (listen below) who stars in the play BABA where she literally transforms herself into an immigrant Egyptian father who will make you laugh and cry.  Play runs April 4-27, 2014 at AlterTheater Ensemble in San Rafael, California. 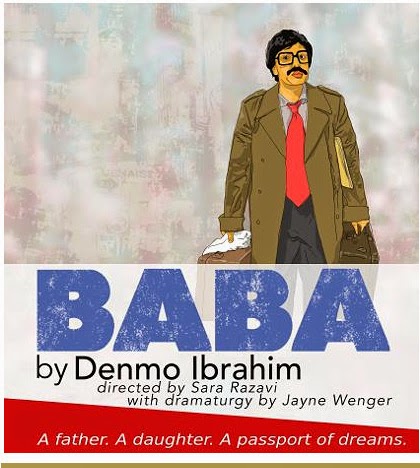 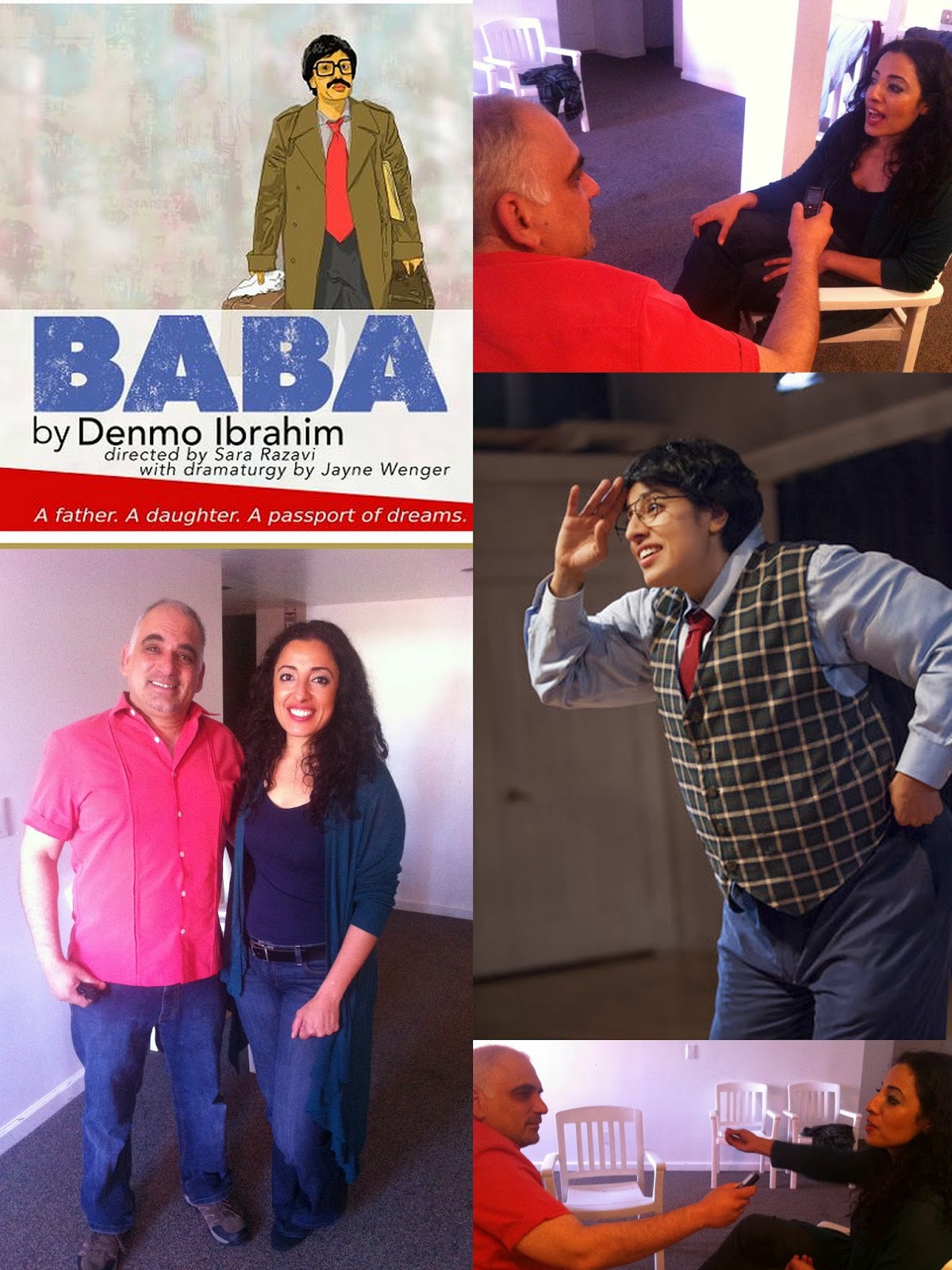 An Egyptian immigrant’s search for American dream Premieres at AlterTheater

In April of 2014, AlterTheater is producing BABA, written and performed by Denmo Ibrahim. The highly anticipated world premiere of this piece comes after workshops at AlterTheater and across the country, including at Noor’s Highlight Series in New York City. Developed as a solo show, BABA spans 30 years and two continents and tells the story of an Egyptian immigrant to New York, his American-born daughter, and their search for the American dream. “This is a classic, all-American story of the immigrant hoping for a better life,” says LitComm member Patricia Silver. “Denmo’s wit, her poetic language and her empathy for her characters make her stories both touching and funny.”


Denmo is the co-founder of the award-winning San Francisco alternative performance group Mugwumpin, as well as a writer and performer. Her work with AlterTheater has been supported by a National Endowment for the Arts grant. She is the past recipient of a Theatre Bay Area New Works Fund grant, in support of her play, Ecstasy: A Water Fable, which premiered at Golden Thread Productions. “I’ve always been a huge fan of Denmo’s work,” says AlterTheater co-founder Jeanette Harrison. “As a performer she is so emotionally grounded and so physically specific that she just draws the audience right in to the life of her characters.”

Joining Denmo on the creative team for BABA are director Sara Razavi, who works frequently at Golden Thread Productions and who focuses on solo performances, and dramaturg Jayne Wenger, who most recently directed and dramaturged Margo Gomez’s new solo piece at the Marsh in San Francisco.

Denmo Ibrahim holds an MFA in Actor-Created Physical Theatre from Naropa University and a BFA in Acting from Boston University. She has performed for A.C.T, Aurora Theatre, Huntington Theatre, and the Vineyard Playhouse to name a few. Denmo has been nominated for an Irene Ryan Acting Award and a Joseph Jefferson Award for “Best Actress in a Lead Role”. As a playwright, she was the winner of the 2011 Highlight Series produced by Noor Theatre and New York Theatre Workshop and was selected as an Honoree for the Middle East Initiative Award. She is a founding Artistic Director of Mugwumpin, an award-winning performance group based in San Francisco. To date, Denmo has co-created seven ensemble based performances and written two full-length plays. Her plays include Ecstasy I a water fable -- a two-year Theatre Bay Area commission produced by Golden Thread, andBaba, a riveting solo performance exploring Middle Eastern identity that workshopped throughout the U.S to sold-out houses, including a one-night engagement at AlterTheater (under the title FUNNY, a trunk show). Denmo is the founder and CEO of Earthbody, an organic day spa for healing -- voted Best Day Spa by SF Weekly and CitySearch. She also formulates an organic bodycare line inspired by the principles of Ayurveda. In addition to running a successful business, Denmo is an educator, therapist, writer and Holistic Coach. She is personally committed to acts of love, the power of art, and the wisdom of transformation.

Sara Razavi graduated from UC Davis with a degree in sociology and theatre studies. In addition to her training at Davis, her theatre training involves a year-long theatre focus at University of Birmingham, in England. She was one of the founding members of elastic future an experimental multi-disciplinary arts group working in theatre, film / video, and other live performance, with whom she has collaborated on several ensemble generated works. She is regular performer and active Board Member of Golden Thread Production, a theatre company focused on exploring Middle Eastern cultures and identities. Razavi focuses on supporting actors develop their one-person productions. Recently, she has directed Maryam Rostami’s one-woman show, Persepolis, Texas for CounterPULSE Theatre’s Summer Special Program, and Denmo Ibrahim’s BABA for Minneapolis Fringe Festival. Razavi has also been involved with other Bay Area theatre companies including Shotgun Players, TheatreFIRST, Darvag, and New Conservatory Theatre Company. Razavi lives in San Francisco, where in addition to her theatre work, she recently completed her MBA, and works at Working Solutions, a microlender which provides capital and support to small business owners.

Jayne Wenger is a director and dramaturg whose exclusive focus is on original material. She is the past Artistic Director of the Bay Area Playwrights Foundation and was the Artistic Director of Women’s Ensemble in New York. She has developed the emerging work of acclaimed playwrights throughout the country including David Adjmi, Kate Bornstein, Clarence Coo, Chris Chen, Nilo Cruz, Sara Felder (JuneBride and Shtick! both touring shows), Dan Hoyle, Holly Hughes, Naomi Iizuka, Sherry Kramer, Schatzie Schaefers and Liebe Wetzel’s Lunatique Fantastique and Lauren Yee. She has collaborated with Claire Chafee on numerous projects, including the original direction of the world premiere of Why We Have a Body at the Magic Theatre in San Francisco. Her work has been recognized with many awards. Current work: Dramaturgy for Marga Gomez’ Love Birds (The Marsh San Francisco and La Mama NYC), direction and dramaturgy for Come to me Leopards, (Cyrano’s Theater, Anchorage, Alaska) dramaturgy for Arlitia Jone’s Rush at Everlasting(Perseverance Theater, Juneau, Alaska) and dramaturgy for Deke Weaver’s Wolf, part of The Unreliable Bestiary Project (University of Illinois, Urbana, Champaign). Recent projects include Michelle Carter’s 20 Friends at 3 Girls, Becoming Grace by Naomi Newman for A Traveling Jewish Theater; Michelle Carter’s How To Pray for Crowded Fire; Claire Chafee’s FULL/SELF for The Playwrights Foundation; Anne Galjour’s You Can’t Get There From Here for Z Space and Dartmouth College and Men Think They Are Better Than Grass with the Deborah Slater Dance Theater. Jayne is an AlterTheater associate artist and a member of The Dramatists Guild, Literary Managers and Dramaturgs of the Americas, League of Professional Theater Women, and serves on the Advisory Board of Last Frontier Theatre Conference.

ABOUT ALTERTHEATER ENSEMBLE:
AlterTheater works the opposite of the movies: discount tickets are available when our plays first open. We work to make sure all members of our community can come together to share stories.

We believe the world can change for the better when artists dream big, take risks, and push themselves to the limits of their imagination….and then take another step.

What: In this new comedy from celebrated physical performer Denmo Ibrahim, freedom and family collide when an Egyptian immigrant’s search for the American dream leads his American-born daughter on a quest for home.

Ticket information:
Individual tickets are $25, or less during the first two weeks of performances, www.altertheater.org. Featured discounts include Choose-Your-Own-Price Night, Senior Discount Day, and more, some of which are only available online.