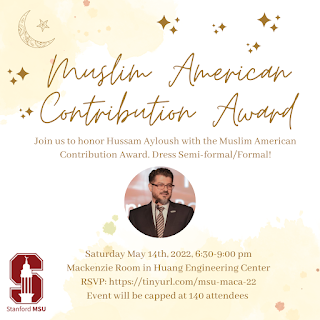 The 2022 Muslim American Contribution Award (MACA) Banquet took place on Saturday, May 14, 2022 at Stanford University.  This year, the MACA award was given to Hussam Ayloush (CAIR-California Executive).
"Hussam Ayloush has been [a] lifelong human rights and democracy activist for causes here and abroad. He took his current position as Executive Director of the Greater Los Angeles Area office of the Council on American-Islamic Relations (CAIR-LA) in 1998.  Through his work at CAIR, Hussam engages elected officials, law enforcement, media, and the public to enhance understanding of Islam, encourage dialogue, empower American Muslims, and build coalitions that promote justice. As an expert on American Muslim issues, Hussam regularly appears on local, national, and international media; and frequently speaks at schools, Islamic centers, churches, conferences, and universities." [Source: CAIR website]
at May 15, 2022 No comments:

I first heard about the Lebanese short film Warsha when its Director Dania Bdeir was awarded the Short Film Jury Award (International Fiction) at the Sundance Festival (2022). Now that I've watched it, I can safely say that it more than lives up to the hype.

Everything about this film oozes with originality, from the theme to the cinematography to the acting to the soundtrack in which Umm Kuthum is remixed and resurrected in a subversive way.
Khansa's performance as the lead is brilliant; although the character never utters a word, he leaves us stunned and amazed through powerful gestures, body movement, and facial expressions.

This is a courageous film that tackles issues related to gender, identity and the refugee crisis in a variety of unexpected ways.
On a side note, I was delighted to see Khansa in the main role, having interviewed this amazing performance artist/singer for my radio show a few years ago.  Since then, I had followed his amazing music videos and performance clips on YouTube but to see him star in this film takes our Lebanese icon to a whole other level.
You can listen to my interview with Khansa directly at THIS LINK or below (go to 37:07)
arabology · Arabology 13.2 [Shubbak Festival 2019 Ft Interviews with Bu Kolthoum, Khansa, Juliana Yazbeck]
at May 14, 2022 No comments: