Egyptian superstar Tamer Hosny recently rocked the house (casbah, bayt, etc.) with his live rendition of the Eagles' hit "Hotel California."
The singer performed the track during his recent Marina 2010 Concert in Egypt. 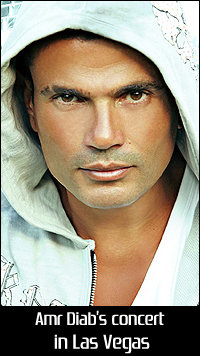 Among those in attendance was Egyptian actor Adel Imam, singer Marwan Khoury, and actress Ahlam.

Exclusive highlights from Fairuz's BIEL Concert (Oct 8, 2010) have been uploaded to YouTube by Fairuz's daughter Rima Rahbany at http://www.youtube.com/watch?v=t580TqTtYmg
- October 09, 2010 No comments:

Fairuz's new album, titled ايه في أمل has just been released, one day after her trimphal return to the stage this week where the 75 year old singer sang to sold out audiences at the Beirut International Exhibition & Leisure Center for two consecutive nights. 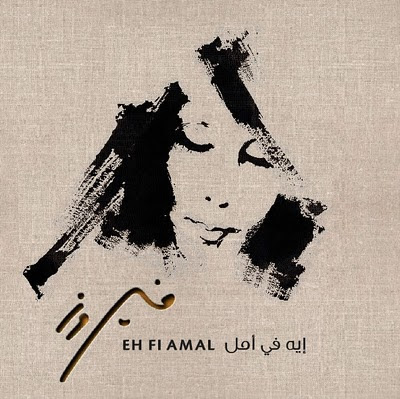 Brand New Pictures of Fairuz from her BIEL Concert this Week

Here are some brand new pictures of legendary Lebanese singer Fairuz, taken during her sold our two-night concerts in Beirut (October 6 and 7, 2010).  The 75 year old singer sang to sold out audiences at the Beirut International Exhibition & Leisure Center for two consecutive nights and performed several new songs from her upcoming new CD which is due out in stores this week. 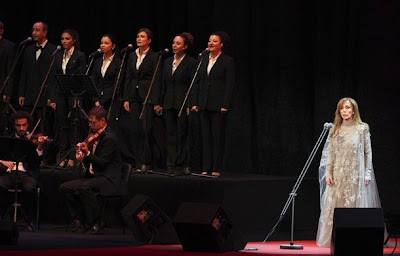 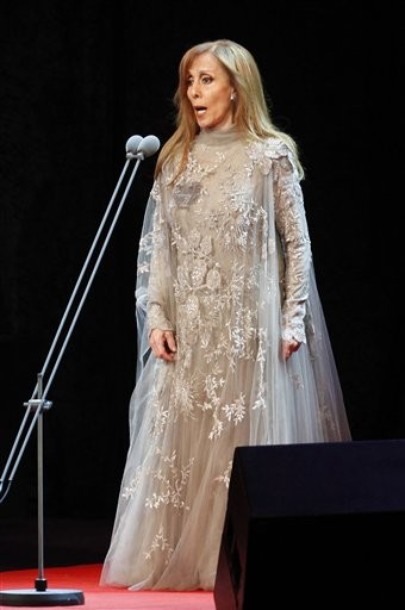 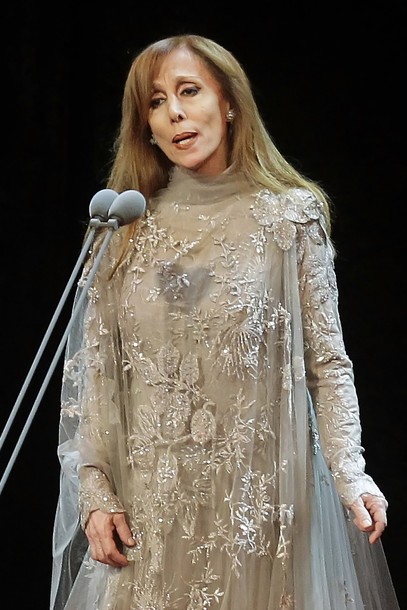 Souad Massi's New Album to be Released on Nov. 8!

The long awaited new album by Algerian singer Souad Massi will be officially released on November 8th this year.  The first single off the album is titled "Houria" (Freedom) and can be previewed for free on Souad's official web page at www.souadmassi.net
Here is the CD cover and the list of tracks: 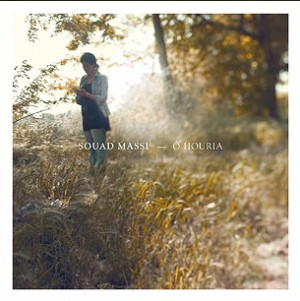 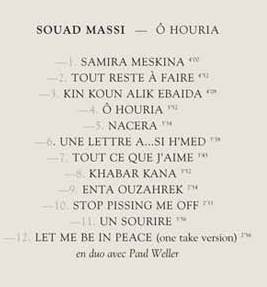 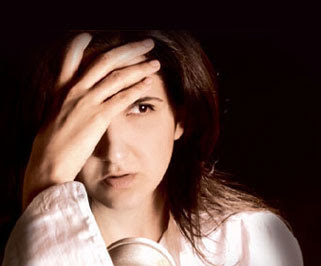 
Tania Saleh is a young author composer interpreter, graduated from the "Sorbonne" in Paris, who dares to broach subjects never treated before in the Arabic song.
One of her very first song (Aalamiyyeh) deals with "globalization " and was selected by RFI to be included in its compilation "Arabesque".
. We find in her texts a little bit of cynicism, a lot of black humor with a caustic bend, a definite talent for writing and a style recognizable among thousands. Usually, beautiful texts are served by a simple melody and simple harmonization. It is not the case with Tania Saleh. The musical arrangements are sophisticated: the riffs of the rock guitar, the riq, the groovy bass are in a perfect dialogue with the kanoun, the oud and the acoustic guitar. An old Rhodes and a Hammond B3 accompany the whole band.
The musicians who collaborated to this project are: Issam Hajj Ali, Charbel Rouhana, Mihran Gurunian, Mounir Khawli, Iman Homsi, Mazen Siblini, Emile Boustani, Roger Abi Akl, Ali el Khatib and Toni Anka
On these days where albums are prepared like "fast food", Philippe Tohmé or "Abou Tarek", husband of Tania Saleh (happy example of a mixed marriage) did not want to deliver from his recording machine anything except an album which attains a maturity level which approaches perfection. This lasted five years.
The songs were recorded in numerous styles before being produced in the final form. Professionals around the world were stunned by the quality of the work even before it was mastered in the most prestigious studio in the world: Abbey Road in London by the legendary Chris Blair. This attention to details continues in the scenic performance. I will have the pleasure of managing and producing Tania Saleh with the help of real talented professionals hoping that this will be the first stone in establishing a new school.
There are those who lament watching the Arabic musical scene. We have chosen to act.


Tania Kassis started her first singing lessons at the age of 16, and gave her first solo opera concert at 17. The next year, she interpreted Cosette in the Musical « Les Misérables » at the UNESCO Palace in Beirut.

This participation had such a success that she was granted the Medal of the town of Ottawa-Hull, the Lebanese Achievement Medaland anExcellency Certificat by « The Canadian Lebanese Professional and Business Association of Ottawa ».

In 2003, she enters the Paris Conservatory in the class of Mr Pierre Catala, qualified by the Julliard School of New York. During this period, she discovers the Musicals and she gives a concert « Special Musicals » at the conservatory and then at the Estivals of Deir el Qamar (Lebanon).

In October 2006, she becomes a member and soloist of the Choir of the Paris Orchestra (le Chœur de l'Orchestre de Paris) and participate regularly to it's concerts at the prestigious Salle Pleyel.

In August , she presents « L'Amour à l'Américaine », a jazzy concert that had a huge success at the Faqra Festival, and finishes the year 2007 with a big Christmas Concert untitled : "Christmas From The Movies" at the Palais des Congrès of Beirut, accompanied by a 12-piece orchestra and movies projections. This concert was attended by more than 1500 persons!

2008 was very rich in concerts: "From Mozart to Gershwin" and her role of Christine in "The Phantom of the Opera" in Paris, a concert in New York for the 125th anniversary of Gibran Khalil Gibran, "The Magic of Broadway" in Lebanon that received excellent comments in the press: "Une voix qui ensorcelle et séduit. Cette voix, on l'écouterait les yeux fermés juste pour le plaisir de la musique" L'Orient-Le-Jour.

She finished the year with a Latin American Concert Tour passing by Venezuela and Colombia, and a concert at the UNESCO Palace of Paris celebrating again the 125th anniversary of Gibran Khalil Gibran and sharing the stage with the famous french singer Francis Lalanne.

In 2009, Tania Kassis presented 2 Islamo-Christian Concerts in Paris & in Beirut. She composed for this occasion an "Islamo-Christian AVE" (an Ave Maria mixed with the Muezzin "Allah Akbar".

She performed in July at the "Christian Song Summer Festival" in Batroun, twice in August at the Faqra Festival ("Around The World" Concert and "Around The Virgin Mary" Concert), and in September at the Saida International Festival organised by Mrs Bahia Hariri "Oumsiya Loubnania".

Tania Kassis has also been invited to be part of the big Opening of the VIth Francophony Games that took place at the "Cité Sportive" in Beirut and that was attended by 30,000 persons as well as the Lebanese President Michel Sleimane, the French First Minister François Fillon, Mr Abdou Diouf, the Prince Albert II of Monaco and other lebanese and international personalities. Tania Kassis sang her "Islamo-Christian AVE " to represent the city of BEIRUT!

In November she offered a second concert in Colombia at the Teatro de Bellas Artes de Bogota that had a big success. She also sang a Maronite Mass at the famous Catedral de Sal that has been transmitted by several local television channels. She ended the year participating to the Second Festival of Sacred Music (Beirut Chant) with her “I’ll Be Home For Christmas” Concert at St Louis Capucin Church.

On February 14th 2010, Tania Kassis has been asked by the Lebanese Prime Minister Mr Saad Hariri to sing theIslamo-Christian AVE at the Martyr Square during the big commemoration of Rafic Hariri’s death in front of more than 200,000 persons. Following this performance, the Pope Benoît XVI asked the Prime Minister to send him a copy of this common prayer!

"Oriental Colors": a mixture of International ans Lebanese songs including different music styles going from Jazz to Bossa Nova and from Traditional to Techno songs with contributions from many renowned musicians and DJs such as Elias Rahbani, Michel Fadel, Jad Mhanna, Said Mrad, Fabrice Mantegna (Tenor of the group ERA) and other Lebanese and French artists.

Some of Tania Kassis’ main performances

2009: Islamo-Christian Concert organized by the World Lebanese Cultural Union and the Lebanese Businessman’s Association of France at Collège des Bernardins in Paris. In March,special Participation honoring the Lebanese President Michel Sleimane at the occasion of his trip to Paris

2008: Concert with the famous french singer Francis Lalanne for the 125 Anniversary of Gibran Khalil Gibran at the UNESCO Palace in Parisorganized by the World Lebanese Cultural Union and the Lebanese Businessman’s Association of France. Role of Christine in "The Phantom of the Opera" (Private concerts in costume) "From Mozart to Gershwin" Concert at Conservatoire Francis Poulenc in Paris

2007: "Eternel Liban" Concert at UNESCO-Paris, under the High Patronage of the Lebanese Delegation of the UNESCO and her Excellency Mrs Sylvie Fadlallah, and with the support of the Lebanese Tourism Information Office of Paris. The aim of this concert was to promote the Lebanese cultural diversity (France)


2008: Concert for the 125 Anniversary of Gibran Khalil Gibran at Colombia University in New York, organized by the New Pen’s League


2001: Represented Lebanon at the « 4th Francophony Games » in Ottawa-Hull


2008: Fundraising concert in Caracas for the Lebanese Red Cross


2008: Fundraising concert at the Club Nogal in Bogota for the “Nuestra Senora del Libano” Association


2010: Fifth Commemoration of P.M. Rafic Hariri’s Death at the Martyr Square on February 14 with the “Islamo-Christian AVE”.


2007: "Christmas From The Movies" concert at the Palais des Congrès & Faqra Summer Festival with a jazzy concert"L’Amour à l’Américaine”


2006: "I'm Dreaming of a White Peaceful Christmas", concert for Peace at the Jesuits Church (Lebanon)


2005: Deir el Qamar Festival with "The Magic Of The Musicals" written and created by Tania Kassis


May 2000: Role of Cosette in «The Miserables» sponsored by the French Cultural Center (UNESCO-Lebanon)

If you missed my latest guest spot on KZSU 90.1 FM  you can now download/listen to the podcast (for free) at http://tinyurl.com/25boqsh
My Playlist:
- October 05, 2010 No comments: