The Art of Revolution: Article by Colleen Gillard & Georgia Wells

The Art of Revolution

At an art school in Cairo, students explore the Egyptian uprising through a once-banned medium: protest art
Full article at http://www.theatlantic.com/international/archive/2011/05/the-art-of-revolution/238049/#slide4 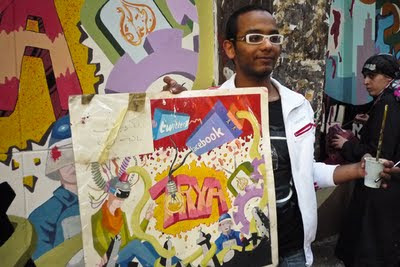 On the sidewalk outside Cairo's Faculty of Fine Arts college on leafy Zamalek Island, just across the Nile from Tahrir Square, hijab-wearing young women are elbow-deep in paint. Absorbed in their work, they climb ladders to study the effect, all the while graciously answering questions from a gathering audience. The students, whose sweet faces are framed by pastel scarves, don't look much like revolutionaries, even if their art tells stories of blood, agony and rage.
Two months after protests forced Egyptian President Hosni Mubarak from office, these students are communicating their feelings about the revolution in the way they know best: by covering the school's drab gray walls with colorful political art.
One of the mural's artists, Youmna Mustafa, 20, points to the bound screaming face on her wall and says her piece is about freedom of speech.

"This is what the square meant to me," the student of mosaic art says. "This is why I went. Not to be able to speak your mind, your wants and desires, share your thoughts out loud, is to feel," she pauses, searching for the word, "dead."
In another ten-by-ten-foot panel, Anas Muhammed, 21, explores the role that the Internet and social media had in informing the public and publicizing the protests. He has drawn a man whose head, once helmeted and blinded by state media, is now brilliantly lit by Twitter, Facebook, and Al Jazeera.
Before the Internet, he says, "all we had to unify us was the Egyptian flag--which I show bleeding from the disrespect Mubarak showed us."
Most of the school's faculty and 2,500-student body attended the demonstrations, according to the genteel Professor of Mural Art Sabry Mansour. Those 18 days of protest and President Mubarak's departure were an emotional earthquake for the country, he says, and he wanted to find a way to capture the energy, optimism, and passion, especially that expressed by the students.
Gazing around the school's courtyard -- where a fully-clothed male model, dressed in shirt and ironed slacks, leans on draped boxes before a life-drawing class of a half-dozen young women -- Professor Mansour says he finally decided to do something that would have been impossible under President Mubarak: protest art.
"The school's walls on the street were covered with graffiti, only it was not" Professor Mansour hesitates politely, "very good graffiti." He realized then, of course, the revolution would make better street art.
Students at the century-old school responded well. After losing one of their peers to the violence -- a well-loved young man majoring in Interior Design and Decor --the students found great meaning in the assignment, Professor Mansour says. All 60 students in the course made a mural design to present. The class held a "democratic vote" to select the seven best.
A green snake winds through another painting on Ismail Mohammed Street, strangling people and drawing blood. "This is about Mubarak, the corrupt, the unjust. A true snake who deceived his own people," says 21-year-old Rehan Nabil.
When asked about the many young women who joined the protests and what kind of place they hoped for in a new regime, Nabil shakes her head.
"This is not about women; this is about everyone. Our country's problems are much bigger than women's rights."
Not just women's rights, she points out, needed better protection. "Everything women have suffered, all our citizens have suffered. Everything you might want for women -- like opportunity, education, jobs, respect, freedom -- you want for everyone."
Nabil describes Mubarak's regime as filled with thieves. "They robbed us of a future." More than anything, she says she wants to see her people's potential and talents put to use.
"We deserve to have a better place in the world. We deserve to join the First World and leave the Third World behind."
But when asked about her confidence in the current political process to bring her country a better future, her smile fades. "We are all holding our breath, waiting to see what will happen." When asked if she worries a theocracy will rise from the ruins of what was once President Mubarak's private kingdom, the sweet young woman in the hijab raises her chin. "We may be a devout people," she says, "but we don't want to be told what to do. We value freedom as much as anyone."
Other students, such as Mustafa, say they feel more confident that good things will come from the culture of the protests. Tahrir Square felt like a new country, she says, "a utopia," full of camaraderie. The power and meaning of joining her countrymen, united by a common goal, brought her to tears, her young face shining. "I felt alive! For the first time, I felt hope for my country."
For now, the murals are a testament to the anger these young people feel about the injustices of the past as well as their hope for the future. They are generating smiles and interest from the neighborhood.
"Passers-by are curious," says Professor Mansour, calling it appropriate and good that the students take public ownership of their pride in helping to change the country.
"It is a very good feeling to change a very bad regime," Professor Mansour says, looking over the murals with avuncular satisfaction. "It feels especially good to communicate this by doing something that would have had us arrested not very many weeks ago. Very, very liberating."