The original article was published at
http://www.thedailynewsegypt.com/music/one-night-with-beirut.html 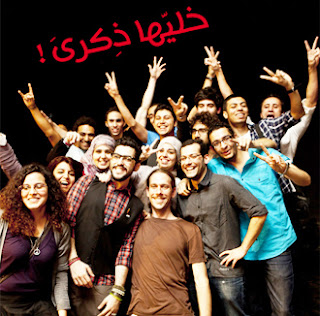 
Be warned — when you ask Mashrou' Leila about their name, the Lebanese band will not give a straight answer. They’re a bit tricky, and might just spin you a yarn from A Thousand and One Nights.

On their first night in Cairo, Al-Azhar Park’s Geneina Theater was packed in preparation, audiences clutching tickets crowding the door an hour in advance. As the night progressed, the grass on the slope leading to the theater was used as seating. Not only were Mashrou' Leila popular with fans that sung along to lyrics, they also won new ones out of the head-banging crowd that lined the front of the stage, and who took over the stage at the concert finale.

Calling the band an “overnight project” would be to lose their name in translation. Rather, the band wonders out loud together about who Leila is, easily completing each other’s stories and sentences as they might do in songs.

“The chemistry” of their fused talents, as front-man Hamed Sinno says, “is flawless.”

“Leila” began when violinist Haig Papazian, guitarist Andre Chedid and pianist Omaya Malaeb posted a call for musicians at the architecture and design school at the American University in Beirut (AUB). From the onset, the band produced original music, which according to vocalist Sinno falls in line with the independent attitude of the band.

Even in an environment like AUB, Sinno finds “a lot of racism, sexism, — political narrow mindedness,” adds Chedid — and homophobia. “I just loved that these guys were mature about these things. They were obviously thinking about how they wanted to live.”

“It really wasn’t somebody that was sitting down and singing an ‘Alice and Chains’ song and covering it. They were really involved with their being.”

“Coming from a design background says a lot about who we are,” says Chedid, “We are people that are open to suggestions.”

The lyrics are penned by Sinno, informed by high-brow reading translated into everyday concerns and language. They are often an expression of the band’s shared thoughts. Words and theories roll easily off the tongue of Sinno, who is equally vocal on different issues.

Marriage is an important and recurring theme in songs such as the popular “Fasateen” (Dresses). Often hand in hand goes the issue of hypocrisy. “It becomes a transaction,” says Sinno, when Chedid criticizes the lavish expenditure that goes around marriages in Lebanon.

Sinno makes a slip onstage, referring to Sadat instead of Mubarak as the ousted president, and laughs at himself. But the audience is already too won over to care.

Speaking of one man’s love for another, “Shim El-Yasmine” (Smell the Jasmine) is also the byproduct of Sinno dabbling in literature. “I was reading Brian Whitaker’s ‘Unspeakable Love’ and there was a part where he was talking about the shame of publicly wavering masculinity in the arts,” said Sinno, “I wanted to try something like that…because I didn’t find it shameful.”

The speaker in “Yasmine” is thus consciously feminized, expressing the desire to “cook your food.” Coming after a messy break-up in a relationship, “I had something I wanted to share emotionally and I was reading something at the time that was stimulating me in terms of how I wanted to express myself.”

Stripped of any masculine bravado and half the instruments, the unhurried tempo of “Yasmine” simply and solely expresses loss and the after-effects of an unfulfilled love, the hopes of what could have been.

Other times the music is an experiment. “Raksit Leila” as an attempt at surrealism after reading Andre Breton, said Sinno. “The sentences in themselves make sense, but in an order they don’t really mean anything,” explains Chedid. An aubergine appears in the thought bubble of the band members in the music video. “Everyone attaches their own meaning to it.” A bit like the name Mashrou' Leila.

“We don’t write about show and inaccessible subject matter; we talk about life in its crudest form.” And sometimes this song takes the form of the language. “In Beirut, language is the biggest class signifier,” said Sinno, adding singing in Arabic was a conscious choice.

“Aal Hagiz’s” lyrics are peppered with profanity, which “is very Lebanese,” Sinno notes. Abusing one’s authority is common in Beirut. “You could have a weird haircut and they’ll pull you out on the side, take you out of the car and search you,” says Chedid. “Aal Haagiz” (At the Checkpoint) is about an imaginary tussle with a guard in a crude conversation.

“Imbillilah,” an untranslatable word, is a quick-paced song that invites the listener to shake along. Yet in that trance, the song inserts some very caustic words on the failure of the wife-beating Abou Masoud, who “would do better in the Gulf / but there’s no alcohol.”

The onomatopoeic lyrics of “Oubwa” mimic a ticking “bomb.” They describe a landscape of insecurity, and also belie a buildup of tension where “everyone’s stubborn” and “religion is the best color.”

The song “El-Hall Romansy” (Romantic Solution) is inspired by “a feminist social theory,” says Sinno. It “criticizes the marital institution as being one that is strictly for economic purposes, masking themselves as spiritual or romantic solutions.” The song translates the message, complaining of high rents. Yet Sinno’s lyrical partner is no doubt a braniac: “Marry me, and read Engels in my bed.”

“El-Hall Romansy” is also the title of their second album under production. “It’s more personal, and sentimental and intimate,” drummer Carl Gerges said.

“Also more synthesized,” adds Hamed. “We’re coming up with things, fake characters to perform lyrically. It’s a lot more liberating, but it’s challenging to come up with something with enough psychological depth”

Success comes in different avatars for the band members. Gerges said “making it” would mean having a production label, others mentioned being able to live off the music.

“A major problem in Lebanon is that the younger people leave the country,” said Chedid, and through their work in supporting other artists, they felt they gave others a reason to stay.

It already felt like an achievement to receive messages from Palestine and Cairo, Sinno said, with audience saying they could relate to the lyrics. At other times, said Chedid, the received messages like, “I don’t understand any Arabic but this music really speaks to me.”

Guitarist Firas Abu-Fakhr was heartened to hear that a pregnant woman played their music to her baby and that she named her child, Leila.

While band members work or study in their fields of architecture and design, they all agree Mahsrou' Leila gets first dibs: “Music is our priority. The reason we work is to sustain ourselves, and to produce music.”

“We all agree that it is once in a lifetime that this happens,” said Chedid, “and especially in the time that it’s happening, it would be stupid to let it pass. We push it as hard as it goes, as far as it goes.”

While Geneina seemed filled to brim with fanfare, for Mashrou' Leila a thousand more nights remain to be lived.

For more information on the band, visit http://www.mashrou3leila.com. 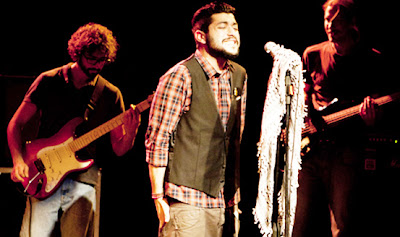