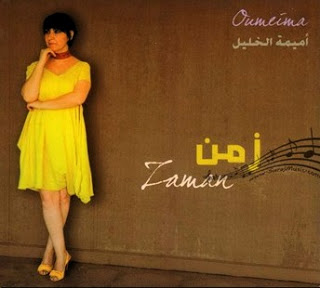 Oumeima (Omeima) El Khalil has just released her much anticipated album 'Zaman' which aims at solidifying the success that her critically acclaimed previous CD 'Ya' made upon the Arab and world music scene.

Here is the track list on the new CD followed by a sample of track 1.  You can hear samples from the other tracks on Oumeima's YouTube Channel at http://www.youtube.com/user/OumeimaElKhalil

ABOUT OUMEIMA:
Oumeima el Khalil is an established Lebanese singer who interprets her culture and passion for music to a worldwide audience. She has a voice that has been touching her diverse fan base for decades and she continues to thrive in the music industry today.


MY CD REVIEW:
El Khalil, Oumeima Zaman (2013)
This is a pleasant album by Oumeima (sometimes spelled Omeima) and follows her previous critically acclaimed album ‘Ya’ which got a lot of airplay on KZSU. Oumeima’s voice is still there, clear as a bell, but this CD seems more traditional than experimental.  Give it a chance because it will grow on you.

All tracks are FCC clean.

2 Niyalak 3:05 [Good for You] Slow ballad expressing the aloofness of the beloved.

3 Rasayel 4:11 [Letters] Sad song about loss of love and loss of one’s homeland.

7 Leh (Revisited) 3:51 [Why] This track was originally released on Oumeima’s previous album and here has been revamped and slowed down. Lebanese dialect.

9 Arifou Biladan 4:41 [I Know Countries] A ballad that borders on a hymn. Picks up in middle with electric guitar which is startling. Classical Arabic.