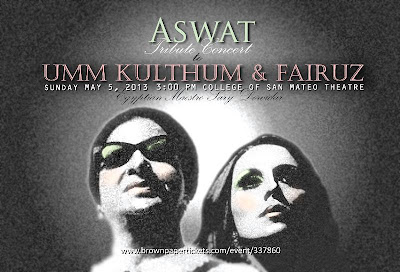 On Sunday, May 5, 2013 Zawaya presented the Bay Area's premier Arab music ensemble, Aswat, in a concert that paid tribute to two of the Arab world's premier female musical legends: "The Star of East", Umm Kulthum (1898/1904-1975), and "The Jewel of Lebanon", Fairuz (born 1935).  The concert took place at the College of San Mateo Theatre in San Mateo.

The program exclusively and strictly presented only music from Umm Kulthum and Fairuz, and equal attention was given to the music of both. The program featured such songs as Umm Kulthum's "Ansak" and Fairuz's "Muwashshahat".
This is just a simple edit from that concert, with part of an instrument solo and then all Aswat members performing:

Email ThisBlogThis!Share to TwitterShare to FacebookShare to Pinterest
Labels: Aswat