Imed Alibi is a multi-talented Tunisian percussionist and musician who has worked with such musicians/bands as Les Boukakes Rachid Taha,and Emel Mathlouthi.   His new CD 'Safar' is a musical masterpiece that blends drums with digital beats, keyboards, violin, accordion, qanun and the nay. 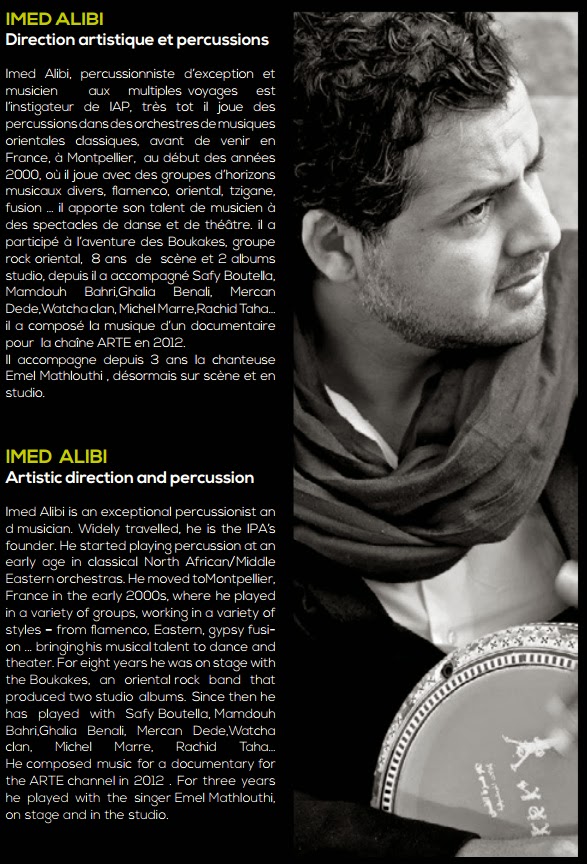 The Imed Alibi Project has brought together a variety of talented musicians who have all contributed to the unforgettable sound of the Safar CD.   They include: 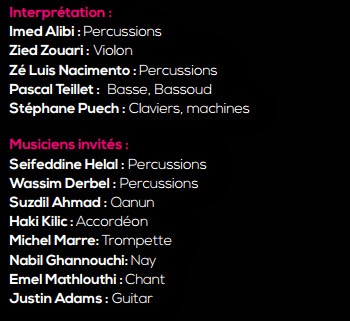 Imed Alibi is an amazing Tunisian percussionist who has played with such musicians as Rachid Taha and Les Boukakes. This is his first solo album and features percussive music cobined with Berber and Sufi rhythms, ample violin sounds, and electronica.  A truly global musical gem.

**1. Pour quelques dinars de plus – Title composed by Stéphane Puech and inspired by the film ’For a Few Dollars More’ with a traditional Tunisian rhythm. 4:06

2. Bounawara – Tribal rhythm from Tunisia with Led Zeppelin influences at the end. 5:02

**4. Maknassy – This is the name of Alibi’s hometown where the Tunisian revolution began. Features haunting vocals by Emel Mathlouthi. Gnawa rhythm. 5:06

"Imed Alibi's music is an epic and joyful expression of a soul revolution. Built on the percussive foundations of Alibi's Berber and Sufi rhythms , virtuoso Tunisian violinist Zied Zouari's emotive quarter-tone melisma soars over rich orchestrations, heavyweight dub lines , and distorted digital beats of French stephane Puech. This is the soundtrack for a new Arab vision of the 21st Century and will do for contemporary Arabic music what Gotan project did for Tango and Latin"--JUSTIN ADAMS(producer,Robert Plant's guitarist)

The opening track 'Pour Quelques Dinars de Plus' is a grand, pounding instrumental that sets the mood with its reference to Ennio Morricone's music for the classic spaghetti western. There's drifting trumpet work on Fanfare D'Alexandrie, a cheerful Arab/eastern-European violin and accordion workout on Balkani Connexion, and – best of all – the thoughtful and then pounding Maknassy, which features guitar from co-producer Justin Adams and rousing vocals from Tunisian singer Emel Mathlouthi, whose protest anthems spurred on the 2011 uprisings.

Imed Alibi's Safar CD Review (Source: http://www.theartsdesk.com/new-music/cd-imed-alibi-safar)
Imed Alibi’s debut album, a rich tapestry of North African, Turkish, Brazilian, Balkan and rock sensibilities, works a treat because nothing feels forced: the conjunctions are happy ones, creating a web of contrasting connections that flow with a sense of inevitability rather than irritatingly clash.

Built like a suite, “Safar” plays on changes of mood, each track leading into the next, with a perfectly judged sense of drama. There are widescreen cinematic moments, with multiple tracks built into a breathtaking wall-of-sound - Phil Spectorà l’orientale with shades of Ennio Morricone - in the opener “Pour quelques dinars de plus”, while the ney, violin and drum in the meditative “Nafass” evoke the slow-spiralling inward-focused movement of the Mevlevi dervish rituals.

The symphonic feel of many of the tracks, often strengthened by the well-timed alternation of tension and release, brings to mind the texture of the Middle Eastern and Egyptian orchestra – swirling violins with the romantic peals of delicate notes from the qanun. Imed Alibi has played percussion in classical orchestras, as well as with Safy Boutella, Rachid Taha and Mercan Dede. For his first album, he is graced with collaborators who have realised his vision with outstanding sensitivity. The French composer and electronic keyboard wizard Stéphane Puech contributes an array of subtle digital effects as well as unobtrusive but effective orchestration. Justin Adams – along with producer Tim Oliver – brings a rock sensibility to the mix, powerful but never drowning in the usual metal guitar clichés.

What holds the album together – and distinguishes it from other attempts at global mix – are Imed Alibi’s strong roots in North African and Arab music. The lilting rhythms and melismatic musical lines anchor his explorations in a tradition that happens to combine extremely well with the energy and ecstatic soul of rock’n’roll. (http://www.theartsdesk.com/new-music/cd-imed-alibi-safar)

My 'Arabology' radio program included a spotlight on Imed Alibi's new CD 'Safar' on March 6, 2014.  Listen at minute at 49 below or at https://soundcloud.com/arabology/arabology-7-8-mike-massy

For More Info about Imed Alibi and to Purchase 'Safar' CD: