My CD Review: DJ Nader - Hizzy Hips in the Mix 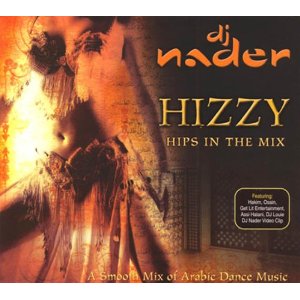 DJ Nader is known for his amazing remixes all over the Arab world. In this compilation—which can be played as independent tracks or as one long uninterrupted megamix (put CD player on ‘Continuous’ instead of ‘Single’)—he remixes both old and new Arabic songs in with emphasis on loud, joyful, rhythmic music that will cause listeners to immediately start shaking their hips (and bellies).

2. Assi Hallani, another Lebanese music legend, sings about the eyes of his beloved (4:01) .

3. Fares Karam represents the Lebanese countryside and villages; here he sings about a girl in a short skirt (4:16)

**5. Wael Kfoury is known in Lebanon for his soft ballads but here he sings in the traditional Dabke genre about the impossibility of rain in August.(4:32)

6. Darine is a Western artist who sings in Arabic; her catchy song here is titled “Yes” (3:53)

7. This is purely DJ Nader’s composition with hip hop vocals in English and Arabic (Englabic) (4:27)

9. Hasna, a female vocalist from the Gulf, sings about a “Love Messenger” in the Khaliji dialect (4:01)

10. Egyptian living legend Hakim, who has been recording his folksy/shaabi brand of songs for decades, is featured in this remix which was originally recorded as a duet with Latin Pop singer Olga Tanon (4:37)

13. This is an instrumental Dabke piece featuring the sound of the mijwiz—a a type of reed clarinet that sounds a little like the Scottish bagpipes (2:20)

15. Kahled Issa’s version of a Iraqi folksong whose translated title is “Above the Palm Trees” (4:09)

**17. DJ Nader’s awesome remix of the Fairuz classic “Nassam Alayna Al-Hawa” featuring the voice of the Lebanese Diva herself (3:49)

18. Fast paced track combining Latin beats with Arabic and Spanish lyrics, based on the Turkish classic “Ya Siti Ya Khityara” (3:20)

19. This 16 second track by Fairuz is how DJ Nader often ends his legendary remixes (0:16)