Wael Ghonim to Speak at Stanford University this Friday

Google Excec Turned Revolutionary Wael Ghonim will speak at Stanford University this Friday.  The event is presented by 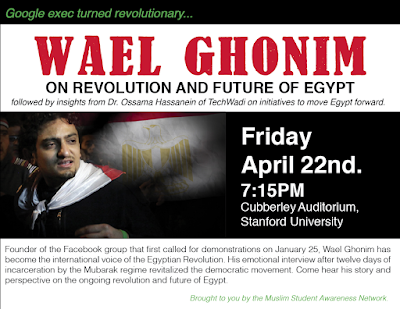 Wael Ghonim: On Revolution and The Future of Egypt
THIS Friday, April 22nd at 7:15 pm
Cubberley Auditorium, Stanford University (http://campus-map.stanford.edu/index.cfm?ID=03-300)
followed by insights from Dr. Ossama Hassanein of TechWadi on initiatives to move Egypt forward

Founder of the Facebook group that first called for demonstrations on January 25, Wael Ghonim has become one of the leading voices of the Egyptian revolution. His emotional interview after twelve days of incarceration by the Mubarak regime revitalized the democratic movement. Come hear his story and perspective on the ongoing revolution and future of Egypt.