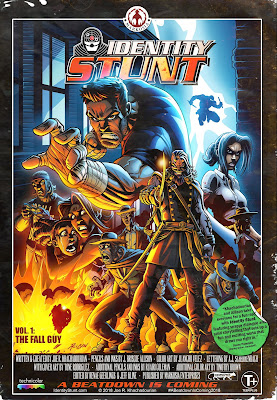 Identity Stunt Vol. 1: The Fall Guy, starring a Jordanian-American stuntman, is now for sale in bookstores and comic shops worldwide!  The 100-page action-thriller odyssey is available at Amazon.com, Barnes & Noble, DriveThruComics, and more!

"It's hard to believe we've made it to the finish line," exclaimed writer/creator Joe R. Khachadourian. "It's been quite an adventure for Sami Nasser, myself, and the creative team, and we could not be more proud of the final product! It's my wish that the joy we cultivated while creating the book is shared with those who read it.”

“This story moves at a break-neck pace,” says artist J. Briscoe Allison, “so to have all of the issues collected in one volume is going to satisfy the 'binge watcher' in all of us! I'm really picky about which projects I work on, but as soon as I read the script, I fell in love! The depth of the characters, the witty dialogue, the insane action...I mean, there's a ten-page car chase!! Who does that?!? Buckle up, friends!”

“Taps microphone: THIS GRAPHIC NOVEL IS ABOUT A JORDANIAN-AMERICAN STUNTMAN!!! Someone option the rights and hire me to direct the screen adaptation!”
Lexi Alexander (Green Street Hooligans, Punisher: War Zone)

“Khachadourian and Allison take everyone for a fun ride with Identity Stunt, featuring snappy dialogue and solid storytelling that sets up a fun and exciting world that draws you right in.”
Jimmy Palmiotti (Harley Quinn, Daredevil, All-Star Western)

“Identity Stunt does several things right when it comes to plot and tone: it tries to pose a twist on the ‘secret identity revealed’ trope, and it also toys with having both a serious enough tone to make its villain seem actually dangerous (and deranged), as well as keeping things light and tongue in cheek where they count, to make the characters seem relatable and fun. That’s what makes it a fresh read (hence the title) in a sea of repetitive, trope-y plots and hero-types.”
Costin Becheanu, Gung-Ho Geeks 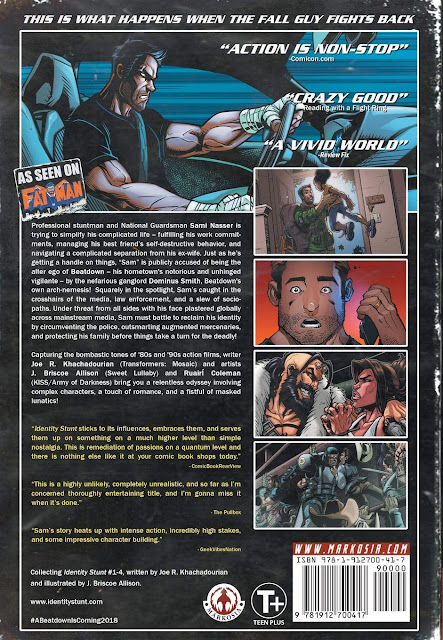 Last year, Identity Stunt crashed through the independent comic book industry, leaving a trail of excitement and praise in its wake:

Now, Markosia Enterprises is pleased to announce the release of Identity Stunt Volume 1: The Fall Guy, collecting issues #1-4 of the digital-first critical smash, plus some never-before-seen bonus material.

Jordanian-American stuntman and National Guardsman Sami Nasser is trying to simplify his complicated life -- fulfilling his work commitments, managing his best friend’s self-destructive behavior, and navigating a complicated separation from his ex-wife. Just as he’s getting a handle on things, "Sam" is publicly accused of being the alter ego of Beatdown -- his hometown's notorious and unhinged vigilante -- by the nefarious ganglord Dominus Smith, Beatdown's own arch-nemesis! Squarely in the spotlight, Sam’s caught in the crosshairs of the media, law enforcement, and a slew of sociopaths. Under threat from all sides with his face plastered globally across mainstream media, Sam must battle to reclaim his identity by circumventing the police, outsmarting augmented mercenaries, and protecting his family before things take a turn for the deadly!

This is what happens when the fall guy fights back.

Identity Stunt Volume 1: The Fall Guy is available now, digitally at DriveThruComics, and in print at Amazon.com, Barnes & Noble, and more!
Identity Stunt #1 and #2 are sold out in print, with second printings on the way. Further details can be found at the Identity Stunt Store.