All I Wanna Do: A Documentary about a Moroccan Father, His Son, and their Dreams of Being Singers 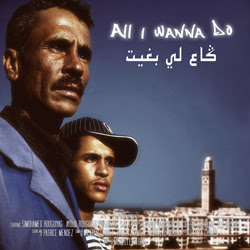 In her latest documentary, All I Wanna Do, Casablanca-based filmmaker Michelle Medina follows a Moroccan father and son as they chase their musical dreams.

Simohamed, impoverished and uneducated at age 48, guards parked cars for a living and is missing teeth. His teenage son gets around on crutches, having been born with only one leg. But they share a love of rap music and a wish to make an album of their own.

Medina discovered her subjects in a Casablanca neighborhood popular with rappers. Simohamed writes lyrics about his country, his mother, alcohol abuse, and his violent father; Ayoub sings. They form a rap duo called Jumrah, or Hot Coals, because, as Simohamed says playfully, they’re “always on fire.” With a little help from Medina—who was able to get musicians from the United States, Morocco, and France to offer recorded instrumentals for the duo to use as music—they record and promote an album. “Poor people have always dreamed to become artists,” Simohamed says on camera.

All I Wanna Do has been screened at more than twenty film festivals around the world and has collected half a dozen awards, including a best-director award for Medina at the 2011 World Music and Independent Film Festival in Washington, DC, and the Mira Nair Award for Rising Female Filmmaker at the 2011 Harlem International Film Festival in New York City. “That was very encouraging because it’s the first time that I’ve gotten an award like that,” Medina says of the former prize, which she accepted in person. She admits to some surprise that the film has netted as many honors as it has. “It’s been very humbling.”

Medina majored in Afro-American studies at Smith, where a visiting professor from Rabat piqued her interest in Morocco. She spent part of her junior year in Rabat and wrote her thesis on Moroccan women in cinema. After graduation she returned to the country on a Fulbright. While there she met a Jewish-Moroccan rapper—“very famous” she said—and the pair had a daughter, who is now 3. The couple split up, but Medina decided to stay in Morocco. She lives with her daughter in the center of Casablanca in an apartment just big enough for the two of them.

“Everyone asks me, ‘What are you doing in Morocco? You’re crazy! Who would want to live there?” Medina says. But sometimes those seeking roots find them in the unlikeliest places. “Even though it’s not my country by passport, it’s not my country by birth, I really have adopted this country,” Medina says. “I can’t quite explain it, but I am connected to this place.”
at February 08, 2012

Email ThisBlogThis!Share to TwitterShare to FacebookShare to Pinterest
Labels: All I Wanna Do, Michelle Medina, كاع لي بغيت