Arabology has just interviewed Mona Damluji, Associate Dean and Director of The Markaz: Resource Center at Stanford University, who spoke about her background, work, research, experience, identity, and her relationship with the Arabic language.  She also highlighted her upcoming talk at Stanford University on Feb 3, 2016.   You can listen or download the interview below or at https://soundcloud.com/arabology/monadamluji

Mona is a liberal arts educator, cultural activist and scholar with expertise in the Arab Middle East and broader Muslim World.  Mona received her PhD from the University of California, Berkeley and was the Mellon Postdoctoral Fellow in Asian & Islamic Visual Culture at Wheaton College in Massachusetts.

Mona regularly curates and organizes exhibits and programs featuring the work of artists and activists linked to Muslim and Arab communities and countries. Major recent projects have included "Open Shutters Iraq" at UC Berkeley and "Arab Comics: 90 Years of Popular Visual Culture" at Brown University. Mona has worked as the educational outreach director for the Arab Film Festival, organizing an annual festival screening for students and teachers in San Francisco, Oakland and Berkeley. Her exhibition and book reviews appear in Jadaliyya, AMCA and the International Journal of Islamic Architecture. Mona's publications also appear in the Journal of Urban History, Comparative Studies of South Asia, Africa and the Middle East, and Subterranean Estates: the Life Worlds of Oil and Gas.

Mona will be speaking at Stanford on Feb 3, 2016 about "Baghdad's Deep Dilemma: Sectarianism and Urban Segregation under Occupation." Her talk will discuss the sectarian-based segregation that has shaped urbanism in Baghdad is a direct outcome of the 2003 U.S.-led invasion and occupation of Iraq. The "post"-occupied city is characterized by the normalization of concrete “security” blast-walls that choke urban circulation and sever communities. The notorious blast walls -- or "Bremer Walls" -- perpetuate and intensify conditions of urban segregation. As the summer's surge of anti-government protests in Baghdad demonstrate, the short-sighted nature of this militarized solution to sectarian-based violence has proven to be a superficial and unsustainable fix to the deep dilemma of sectarian segregation codified in Iraq’s political system. This presentation will examine the context for recent public dissent on the streets of Baghdad through the story of the capital city's fragmentation between 2006 and 2007. 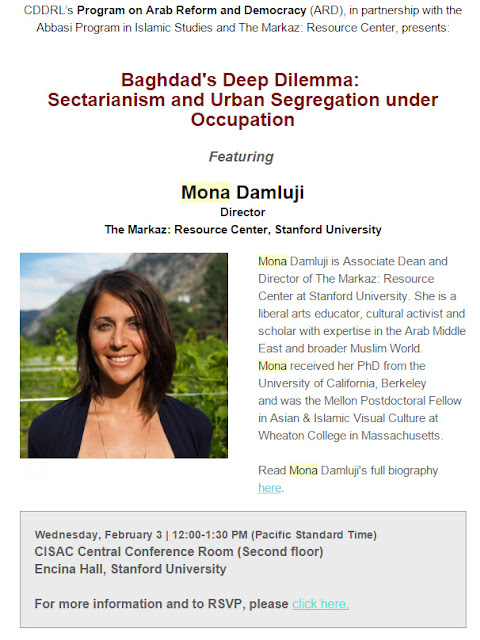