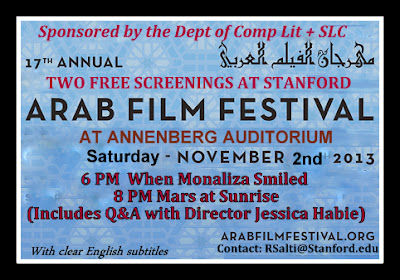 The Arab Film Festival came to Stanford University for the first time on November 2, 2013 and screened two new amazing films that have received much critical acclaim this year: When Monaliza Smiled (Directed by Fadi Haddad) at 6 PM and Mars at Sunrise (Directed by Jessica Habie who was in attendance and participated in a discussion afterwards) at 8 PM. The films screened at Annenberg Auditorium (Cummings Art Building) and were free of charge.

The event was sponsored by the Department of Comparative Literature and the Stanford Language Center, Stanford University.  With special thanks to Professor Alexander Key for making this event possible.

Pictures from the event: 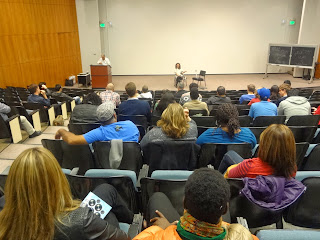 
6:00 PM
When Monaliza Smiled, by Fadi Haddad﻿
Trailer at http://youtu.be/G-L8mQI1xVg

1) WHEN MONALIZA SMILED: Monaliza, a 37-year-old Jordanian woman unable to draw a smile, grew up with her grumpy, older, unmarried, agoraphobic sister, Afaf. After a 10 years wait, Monaliza finally gets a job in an archaic government department where she meets Hamdi, the jolly Egyptian tea guy. On her journey of transformation, Monaliza is confronted by a community of nosy and quirky stereotypes from the heart of the colorful city, Amman. (Free screening on Nov 2 at 6 pm)

2) MARS AT SUNRISE: A painter’s resistance, courage and spirit can never be imprisoned in this highly stylized story of the conflict of two frustrated artists on either side of Israel’s militarized borders. Inspired by the creative journey of renowned Palestinian artist in exile Hani Zurob and on true stories and testimonies from the region, we witness expression, confinement, torture, jealousy, courage and freedom as both artists from each culture strive to paint a picture of life surrounded by conflict. (Free screening on Nov 2 at 8 pm)

Mars at Sunrise Trailer HD from Mars At Sunrise on Vimeo.
The Festival for the Schools is a year-round series of special, FREE events for students and educators. It presents windows on the world that move students beyond the practice of learning about the Arab World. Instead, the films featured connect students to characters and situations that they can relate to and that help them to begin to learn from within the Arab World through the eyes and ears of cutting-edge contemporary filmmakers. 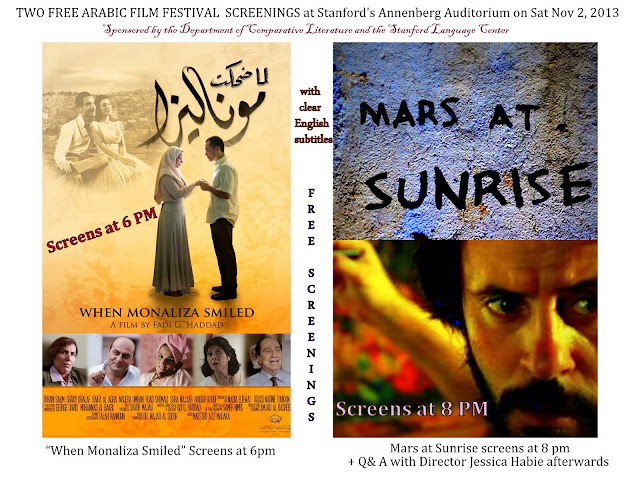