Recorded on August 13, 2018 in Amman, Jordan.  Listen to the interview below or at https://soundcloud.com/arabology/ranasunaij 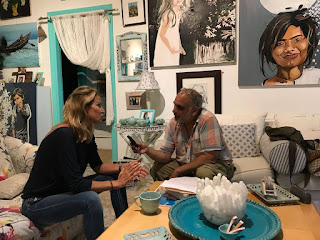 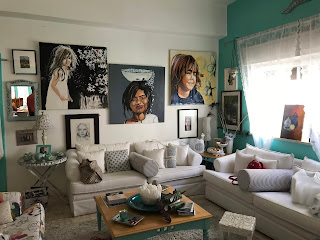 Born In Damascus, Rana Sunaij entered the world wide-eyed and surrounded by a big loving family that were all creative. After studying Literature at the University of Damascus, she left to California to follow her dream of studying art. However, after getting married to an Austrian diplomat, her path changed and took her to Cairo, Egypt where her “nomadic lifestyle” began. The Austrian artistic heritage of Klimt, Kokoshka and the Wiener Werkstätten had lasting effects on her. During a short yet intensive stay in Sri Lanka her work was lastingly influenced by the brightly colored tropical flowers and the paradise like landscapes of the land.


When, in 2006 she moved to Jordan, she instantly “fell in love” with the country and its people. The colors and the vibrancy of Middle Eastern culture left a lasting legacy on her artwork.
For samples of Rana Sunaij's work, see:
at September 13, 2018