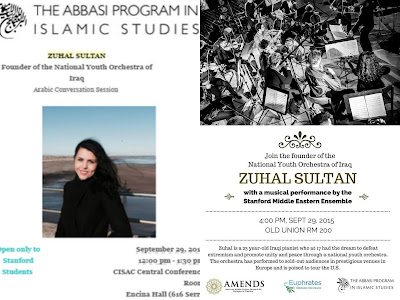 Zuhal Sultan, founder of the National Youth Orchestra of Iraq , gave a series of talks at Stanford this week that centerred on the way she has managed to bring together a group of 43 young musicians from all across Iraq - Shia, Sunni, Kurdish, Christian - to perform together in perfect harmony.

Zuhal gave a talk in Arabic at noon where she spoke about her journey. The talk was introduced by Stanford Professor Alexander Key and sponsored by the Abbasi Program in Islamic Studies, the Stanford Language Center, and the Euphrates Institute. That talk was followed by a lecture, in English, that was additionally sponsored by AMENDS and included a musical intro by the Stanford Middle East Ensemble. See pics below.


Zuhal also granted ِArabology radio host Dr, Ramzi Salti an interview which was recorded at KZSU 90.1 FM.  You can hear the interview below or at https://soundcloud.com/arabology/zuhalsultan

Zuhal Sultan (Arabic: زحل سلطان‎; born 1991 in Baghdad, Iraq) is an Iraqi pianist and activist who founded the National Youth Orchestra of Iraq at the age of 17.  Born in Baghdad, Zuhal Sultan is the youngest of a scientific family of two boys and two girls. Both of her parents obtained their Ph.D degrees in natural sciences from universities in the United Kingdom. She started piano studies at the age of six with the help of a private tutor, then she auditioned to join the Music and Ballet School of Baghdad at the age of 9. After the departure from Iraq of many artists and intellectuals as a result of the 2003 Iraq War, Zuhal was left without a piano teacher. She therefore taught herself, as well as the younger students in her piano class. Despite all these difficulties, Zuhal has performed concerts both at home and abroad, including Jordan, France, Switzerland and at  the Royal Festival Hall in London as a member of the Leonard Bernstein Mass orchestra. Zuhal has won many awards including the
2015 Euphrates Visionary of The Year (see video below or at https://youtu.be/XWAUgDz4iqE)