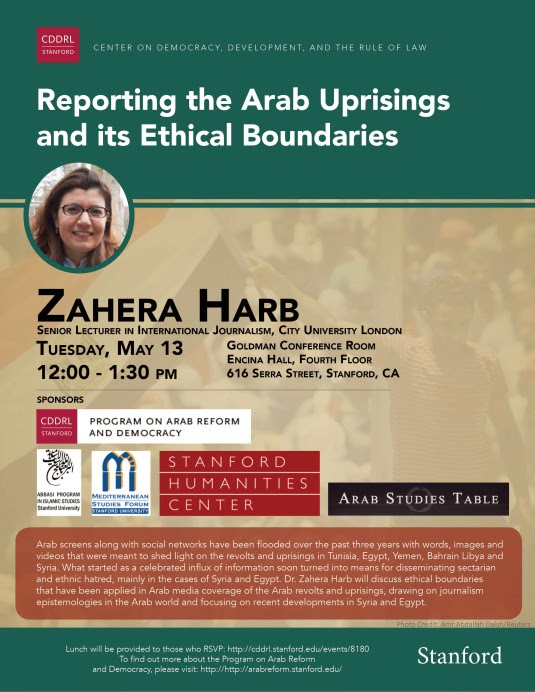 Abstract: Arab screens along with social networks have been flooded over the past three years with words, images and videos that were meant to shed light on the revolts and uprisings in Tunisia, Egypt, Yemen, Bahrain Libya and Syria. What started as a celebrated influx of information soon turned into means for disseminating sectarian and ethnic hatred, mainly in the cases of Syria and Egypt. Dr. Zahera Harb will discuss ethical boundaries that have been applied in Arab media coverage of the Arab revolts and uprisings, drawing on journalism epistemologies in the Arab world and focusing on recent developments in Syria and Egypt.

Zahera Harb is one of the six 2013-2014 FSI-Humanities Center International Visitors and will be in residence at Stanford in May 2014. She is Senior Lecturer in International Journalism at City University London. She received her M.A. and Ph.D. in Journalism Studies from Cardiff University (United Kingdom). As an expert on Arab media, she has published widely on journalism ethics, conflict and war reporting, political communication and representation of Muslims and Islam in western media. Her recent publications include Narrating Conflict in the Middle East: Discourse, Image and Communications Practices in Lebanon and Palestine (2013) and Channels of Resistance: Liberation Propaganda, Hezbollah and the Media(2011). Dr. Harb also has 11 years of experience as a journalist in Lebanon working for Lebanese and international media organizations.