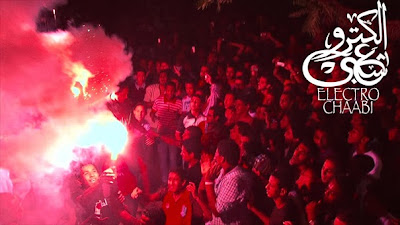 Chaabi and Electro-Sha’abi from Algiers and Cairo

El Gusto 89′ (Swiss Premiere. In presence of film-director) Safinez Bousbia, Algeria, 2013«When talking from Algier, you are automatically also talking of Chaabi-music» explains musician Ahmed Bernaoui: «This is my great passion, that’s what I am living through and for». «El Gusto» is the story of an Algerian Chaabi-orchestra. His Jewish and Muslim companions were separated fifty years ago by the Algerian civil war and live now scattered across France and Algeria. With t «El Gusto»,  filmmaker Safinez invites us to listen to the stories of their lives with a universal aim: Uniting the Jewish musicians in France and the Muslim musicians in Algeria in order to get them to play their music together once again.  Here is a preview of the film:  http://youtu.be/FYbriVTUWj8

Electro Chaabi 76′ Hind Meddeb, France, Egypt, 2013
The big thing in Cairo is something called Techno-Sha’bi or Electro-Sha’abi.  Born in the urban slums of Cairo, this music was subsequently discovered by experimental musicians as well as multinational companies. Director Hind Meddeb (in attendance at event) invites the spectators to take a plunge into the heart of the Electro-Sha’abi world.  Here is a trailer (http://youtu.be/9ADViq_KbxM):

Cairo Electro-Sha’abi Clubnight!
This unique event features MC Sadat, MC Alaa 50 Cent, DJ Ramy (Egypt); Cairo Liberation Front (Netherlands); Rocco al-Nigretti (Egypt); Special guest: FOKN Bois (Ghana)
On the occasion of the RELEASE of NORIENT LP «Sonic Traces: From the Arab World» – NORIENT and the 5th NORIENT Music-Film-Festival invite you to «shake your booty» at the first grand Electro-Sha’abi Club-Night of Switzerland.
Here is a sample of the music that will be included by MC Sadat & MC Alaa 50 Cent (follow at https://soundcloud.com/sadatfifty)

For more info, see below or go to http://norient.com/en/events/5-norient-musikfilm-festival-2014/ 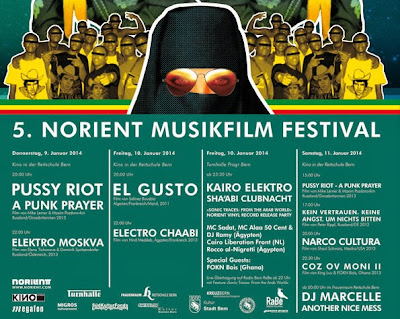