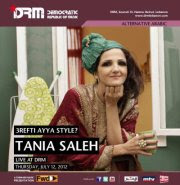 Tania Saleh's 'Omar W Ali' is a timeless song pleading for peace and fraternity between both the Shiite Muslim and the Sunni Muslim communities in Lebanon and the Middle East. This version has been recorded live during her performance at the Democratic Republic of Music in Beirut on December 2011.

This song is available at http://forwardmusic.net/music/wehde

After the great success of Tania Saleh’s latest album “Wehde” released in 2011 and Nadine Labaki’s internationally acclaimed film "Where Do We Go Now" that she co-wrote the songs for, she decided to review all her repertoire at DRM where she will perform songs of her first and second album in addition to Nadine Labaki’s films songs.  She will also perform 2 new unreleased songs that she wrote for her next album.