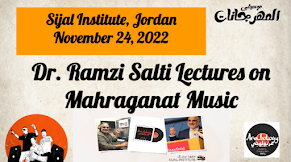 Watch complete video at https://youtu.be/vaeJUCuzqGs
You can now watch a complete recording of a new musical lecture by Stanford Lecturer Dr. Ramzi Salti titled "Mahraganat Music: The Arab World's Version of Hip Hop" which took place at Sijal Institute in Jordan on Thursday, November 24th from 12-2 PM. Watch below or at https://youtu.be/vaeJUCuzqGs
Playlist to accompany this lecture is at this link.
Description:
Over the past 15 years, Egypt has witnessed--and banned--a new musical genre called Mahraganat. This lecture attempts to analyze that phenomenon by dissecting popular song lyrics (in Arabic and English) by musicians who established the genre.
Chapters in this video:
Coming soon
About Dr. Ramzi Salti:
He was born in 1966 in Lebanon. French-educated in Beirut, he completed his high school education in Jordan. In 1983, he moved to the United States where he earned his B.A. in French and English and M.A. and Ph.D. in Comparative Literature (Arabic, French, English) at the University of California at Riverside. Dr. Salti has been a full-time Lecturer in Arabic at Stanford University since 1998. He authors his own Arabology blog at www.arabology.org and hosts a weekly radio program/podcast titled 'Arabology' which airs on KZSU Stanford 90.1 FM. Podcasts are available at this link.
Watch above or at this link
at December 01, 2022