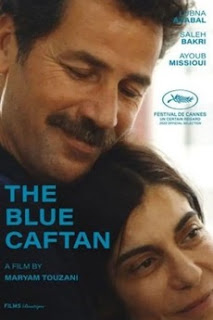 The Blue Caftan  (2022) is one of the most moving films I have ever seen, not only in terms of Arabic films but as a global cinematographic gem.
Directed by Maryam Touzani  (who wrote and directed the unforgettable Moroccan film Adam two years ago) this film takes on the topic of gay men who, all too often in certain societies, get married to a woman who, sadly, becomes victimized twice over--once by society and once by her troubled husband who cannot reveal the secret of his torment to her.
Unlike most such narratives, however, The Blue Caftan spotlights the often dismissed feelings of the wife's feelings in such situations; her experience, for once, transcends her attempt to coexist and/or completely reject her husband's secret love.  Her pain, her view, her empathy--even her flaws--are all brought to the forefront here,  She matters in this film and we find ourselves rooting as much for her as we do for the husband who, despite being gay, does not simply act out on his feelings without any consideration for his wife and her needs. 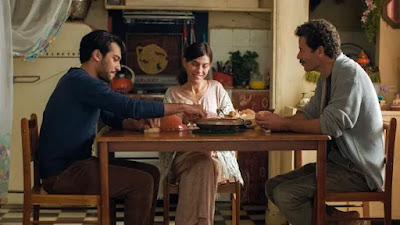 Left to right: Ayoub Messioui, Lubna Azabal and Saleh Bakri in The Blue Caftan
COURTESY OF LES FILMS DU NOUVEAU MONDE - ALI N' PRODUCTIONS - VELVET FILMS - SNOWGLOBE
The married couple is played here by two seasoned Arab actors, Lubna Azabal and Saleh Bakri, both of whom deliver stunning performances.  There are no outdated representations of a typical love triangle here, just a series of tender and unanticipated moments that restore one's faith in love as well as in the the power of cinema.
Film review above by Dr. Ramzi Salti
PLOT SUMMARY:
Halim and Mina run a traditional caftan store in one of Morocco’s oldest medinas. In order to keep up with the commands of the demanding customers, they hire Youssef. The talented apprentice shows an utmost dedication in learning the art of embroidery and tailoring from Halim. Slowly Mina realizes how much her husband is moved by the presence of the young man.
MORE ABOUT THIS FILM:
at June 05, 2022