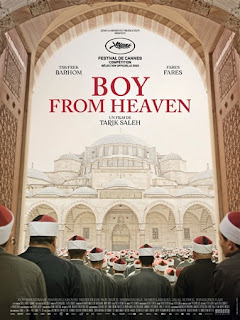 Boy from Heaven (Arabic title ولد من الجنة) is one of very few recent films that have dared to address the increasing tension between religion and state in Egypt today--a fact that was explained by Director Tarik Saleh's comment at Cannes in which he stated that “Egyptians who live in Egypt cannot tell the story. It’s impossible to do so.” Saleh, a Swedish citizen now, took a risk in making this film and, judging from the response that he received at Cannes this year, his efforts seem to have paid off.
The setting is Al-Azhar Mosque/University in Cairo is known as "the Seat of all Muslim Learning"--but the film was actually in shot in Istanbul. This new location allowed Saleh to film truly gorgeous and powerful scenes, settings, characters and colors--beautifully edited and interwoven so as to capture and retain the attention of the audience throughout the film (which runs over 2 hours).
Tarik Saleh's Boy from Heaven: Official clip from Cannes Film Festival 2022
The film stars Tawfeek Barhom (Adam), Fares Fares (Ibrahim) and Mohammad Bakri (General Al Sakra). It has received rave reviews by (mostly) Western critics after it screened at Cannes but has also proven to be quite controversial in certain countries, particularly Egypt where it has reportedly been banned.
Director Tarik Saleh + cast at the Cannes film festival 2022
This is not the first controversial film by Director Tarik Saleh whose movie The Nile Hilton Incident caused quite a debate upon its release in 2017 (see trailer below).
at June 07, 2022