The August 11, 2016 Arabology Podcast featured my interviews with talented filmmakers in Jordan whose films are truly worthy of your attention.

Listen to these interviews via https://soundcloud.com/arabology/arabology104 (start at 1:43:46)

Here is a list of the filmmakers that were interviewed during the show:

1.  Anas Khalaf, Director of Driving to ZigZigland, Searching for the Translator (short) and currently filming a feature titled The Translator in Jordan. 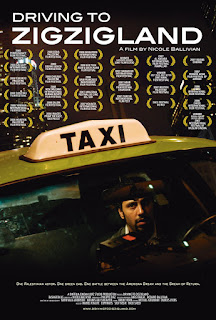 Born in Syria, but raised in France, Anas moved to Los Angeles in order to work with Frederic Golchan Productions. Whilst in LA, he co-produced the feature Prospect and also served as First AD on The Adventures Of Frank Dern.

His short Syrian film Deaf Day has toured international festivals. His current projects in development include The Sytuation, which will be produced by John Molloy of Mushroom Pictures, Australia and the short film Ham to be shot in Chicago.

Anas holds an MBA from the Normandy Graduate School of Business in France.


Zain Duraie is an independent writer/ director who has worked on several local and international productions in many different positions. She graduated with a film degree from the Toronto Film School were she wrote & directed 2 shorts as a part of her graduation project. Zain has been training her way up for the past two years at Philistine Films with acclaimed director Annemarie Jacir and producer Ossama Bawardi were she worked from pre-production to postproduction on their latest film When I Saw You.  Duraie also just finished her first short film Horizon produced by Philistine Films. She also just co-starred in Rami Yasin's short Film Inovertime is currently writing her first feature length film broaching the topic of mental illness in the Middle East. (Source: IMDb)


Muhammad El-Khairy is a Freelance Director/Producer who has collected experiences in a number of capacities, most notably as director, producer, promotions producer, and editor on a variety of projects including television programs, feature films, documentary programs, web content, television promotion, short films, corporate films and corporate videos.

His mockumentary film #Hashtag was produced as web content and is available, with English subtitles, on YouTube and Vimeo.  View below or at https://youtu.be/Sh8GnWPPHjQ

Bassel Ghandour is a Jordanian writer and producer, known for Theeb (2014), Glass Half Full: The Jon Hovac Story (2010) and The Hurt Locker (2008).  Theeb (Arabic: ذيب‎‎, "wolf") is a 2014 Jordanian Arabic-language Oscar-nominated drama thriller film which focuses on a young Bedouin boy.

Here is the trailer for Theeb (film now available on Netflix): https://youtu.be/US3NKlGzkwg

4.  Interview with Faisal Attrache and Deema Dabis, Producers of From the Mountain من الجبل

From the Mountain is a Historical Drama/Biography that is being filmed in Jordan.  It is set in 1922 Syria, under French colonial occupation where Sultan Basha Al Atrash rises up to regain his dignity, freedom and sovereignty when his guest is arrested. Interview with Producers Faisal Attrache and Deema Dabis was recorded in Jordan (July 2016)

Watch Faisal Attrache speak about the film below or at https://youtu.be/wn9_VNE_7As"

Faisal Attrache is a Syrian American Director/Producer known for his work on Growing Home (2014), Documenters (2014) and Larry's Most Excellent Hypothesis (2012). His latest project, From the Mountain, tells the story of his great grandfather Sultan Basha Al-Atrash and will begin filming in Jordan in 2017.

Deema Dabis holds a BA in Journalism and an MFA in Cinema from the Red Sea Institute of Cinematic Arts. She is currently working on a number of projects, including finishing her first short film, The Sri Lankan, and developing two other film projects, Swimming Over Jordan, and Shake, a narrative short that is a scene from a longer fiction film that she is developing.  Dabis is also co-Director of the documentary shorts, Behind the Music: 47 SOUL 2013, and The Path to Ayla (2012).

She is Co-Producer of the film Behind the Mountain.

You can listen to the entire Arabology 10.4 Podcast below or at https://soundcloud.com/arabology/arabology104