Emel Mathlouthi Touring the US in October 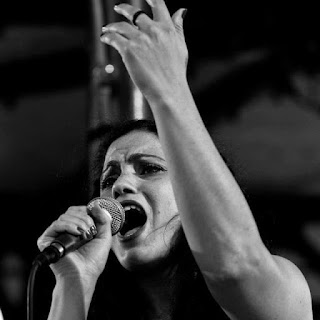 Tunisian singing legend Emel Mathlouthi, whose music has been credited for fueling the Tunisian and Egyptian revolutions, will be performing at the following venues in the US this October:

Emel Mathlouthi kindly granted Arabology radio host Dr. Ramzi Salti an interview which you can hear below or at https://soundcloud.com/arabology/emelmathlouthi

About Emel Mathlouthi:
In 2007, the Tunisian singer, guitarist, and composer, Emel Mathlouthi, fled the home country that banned her songs and moved to France. There, she further developed a repertoire that vented a yearning for freedom. With lyrics provided by Amin El Ghozzi, she wrote and performed "Kelmti Horra" ("My World Is Free"), which ultimately went viral on social media and became an anthem of the 2010 Arab Spring.

Mathlouthi sings mainly in classical Arabic or Tunisian dialects. Her self-produced album marries a lyrical purity of voice with western strings, Maghrebi percussion and electronica. On her debut album, she inhabits, and makes her own, elements from rock and folk, fado and flamenco, Celtic and Tzigane, north African gnawa and rai.

Born in 1982, she admired her father's collection of vintage protest songs, from Bob Dylan to Victor Jara. And she was captivated by the free expression of blind Egyptian troubadour, Sheikh Imam. After studying graphic design at Tunis University, she discovered the release and rebellion of rock and hasn't looked back.

"I never dreamed that my songs would be sung on the streets," she says. "For more than 50 years, we have been ruled by dictators. We aren't used to deciding for ourselves... but the revolution is not finished."