Pierre Dulaine at Stanford on Friday May 29 (Noon + 7pm)

TWO events for Ballroom dancing legend Pierre Dulaine were planned at Stanford on Friday May 29 (see flier below):

1. Noon Lunch Talk at Language Center (Building 30-102): SEE VIDEO BELOW
Mr. Dulaine discussed his 'Dancing Classrooms' method which he applied in his award winning documentary Dancing in Jaffa to bring Arab and Jewish children together through dance. Mr. Dulaine spoke about the film, his journey into the world of dance and his experience as a Judge on the Arabic version of the TV show 'So You Think You Can Dance.' Includes audio-visual intro by Dr. Ramzi Salti.  See video at https://youtu.be/h2aQzq4H1qk

2. 7pm Screening of Dancing in Jaffa + Q&A with Pierre Dulaine (Building 260-113):
Arrive by 6:30 pm for a live performance by the Stanford Middle East Ensemble, followed by a screening of the film at 7 pm + Q&A with Mr. Dulaine (moderated by Ramzi Salti). Dinner Provided.  Watch video below or at https://youtu.be/uEQ1NAz6beo

Events were sponsored by the Center for Democracy, Development and the Rule of Law, The Abbasi Program in Islamic Studies, Taube Center for Jewish Studies, Stanford Language Center, Division of Literatures Cultures and Languages, Department of Comparative Literature, The Department of Theater & Performance Studies (TAPS), ITALIC, Arab Students Association at Stanford, Hillel, Jewish Student Association, the Arab Film Festival and a generous artsCatalyst grant by the Stanford Arts Institute. 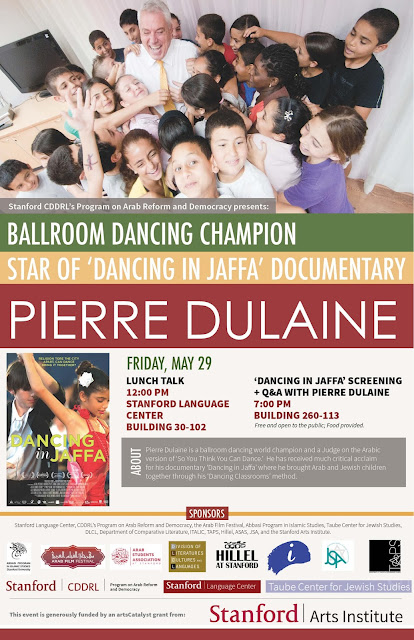