Australia may have Dame Edna, a character created and performed by Australian dadaist performer and comedian Barry Humphries, but for the past quarter of a century the Arab world has laughed with their own version of the Dame--the hilarious Im Hussein, a character created by Najee Mondalek who performs the part, in drag, to thousands of Arab audiences worldwide.

Najee Mondalek is an Arab-American actor/comedian who is best known as his 'drag' personality, the hilarious Um Hussein. He is currently touring the USA with his latest show titled the “Im Hussein Jubilee Show” which celebrates 25 years of comedy staged by the Ajyal Theatrical Group, the first Arab-American theatrical group in North America.  For more info see http://www.imhussein.com/

Mondalek founded the AJYAL Theatrical Group in 1988 and continuously performs for Arab-American audiences in The United States, Canada, Australia and the Middle East. The everyday lives of Arab-Americans, including their their mistakes and mishaps, constitute the subject of the Ajyal Theatrical Group's shows.

Ajyal has been the one constant for Mondalek. He writes a new show nearly every year. In September 1994, his theatrical life underwent a transformation. The centerpiece of his creative life, Im Hussein has become his Dame Edna, starring in six hit comedic plays since "Smile You Are in America," a comedy about immigrants trying to adjust to their new country. The main character was an older woman named Im Hussein. Three days before the first performance the father of the actress playing Im Hussein died. Mondalek couldn't find anyone to replace her. Thinking about Robin Williams as Mrs. Doubtfire and Dustin Hoffman as Tootsie, Mondalek took the part himself.

Here is an interview with Najee Mondalek, followed by pictures from the Im Hussein Jubilee Show (in San Francisco) which took place at the Palace of Fine Arts on September 13, 2013.

Interview with Najee Mondalek who plays Im Hussein:
Interview with im hussein play actors and writer in Scottsdale, Arizona. from breekmedia on Vimeo.

Pictures from the  Im Hussein Jubilee Show in San Francisco on September 13, 2013: 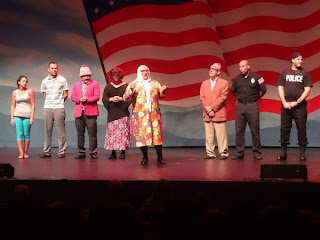 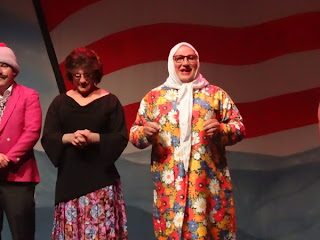