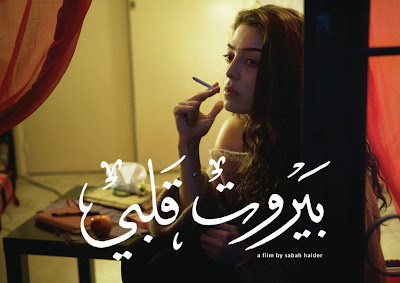 Beirut, My Heart | بيروت قلبي is a gem of short film directed by Sabah Haider exploring, among other things, the effects of a breakup on a young woman in Beirut. Beautifully written and filmed, the film accomplishes a lot in its 9 minute duration.  The film stars Cynthia Kozah, with Carmen Lebbos and Makram Halabi.

You can view the film for free (Arabic with English subtitles) at http://www.yallatv.me/media/films/personal-thriumph/short/beirut-my-heart.aspx

Beirut, My Heart presents a deeply personal narrative told eloquently and sincerely. Edited by the talented Bettina Waked, the film also features the work of numerous Lebanese artists, including poet Saseen Kawzally, calligrapher Ayman Jaber, an original music score by musician John-Paul Jalwan, and the extraordinary voice of a young man from the suburbs of Beirut. Art direction and wardrobe were created by Olga Habre.

Beirut, My Heart was written, produced, and finished post-production entirely in Beirut, Lebanon. The film was completed in July 2011.

Here is the trailer of the film (http://youtu.be/gJMQlOiY4H4):

WATCH 'Beirut My Heart' ONLINE NOW!
You can watch this film online now at http://www.yallatv.me/media/films/personal-thriumph/short/beirut-my-heart.aspx.  With thanks to Director Sabah Haider for making this film available for audiences worldwide.