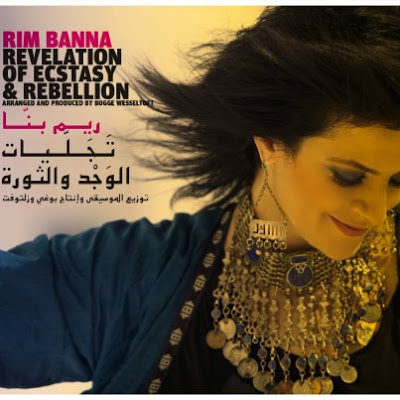 Over the past few years, Palestinian singer Rim Banna has seen the music she had created over the last decade become part of the Arab Spring's "soundtrack".  This is her latest album, released in 2013--a soothing, tranquil, powerful album that should be listened to in its entirety.  All tracks are in classical Arabic except 11. Lyrics are in many instances poems by such poets as Ibn Arabi ابن عربي (track 12), Badr Shaker Assaiab بدر شاكر السياب (tracks 2, 6, 7),  Mahmoud Darwish محمود درويش (track 4), Rashid Hussein راشد حسين (track 1), Al-Hallaj الحلاج (track 8) and Ibn Al-Farid ابن الفارض (tracks 3, 5, 10). Track 11 was written by Amara Al Omrani عمارة عمراني, a Tunisian prisoner who was tortured under the reign of Ben Ali.


Review from YouTube Published on Jan 17, 2013
Arranged and produced by Bugge Wesseltoft
Original Review at http://www.youtube.com/watch?v=b6_qCz_BTp4

Throughout the "Arab Spring", Rim Banna, the best-known voice of Palestine, has seen how the music she has created over the last ten years has become part of the revolution's "soundtrack". She has toured and held concerts in several of the countries where artists have mobilized the masses to overthrow regimes and presidents, especially in Tunisia and Egypt, where she has had many performances. Now Rim has searched back into the Pan-Arabic cultural heritage and composed her own music for classical Arabic poetry, which through time and space reflects the revolutionary spirit that permeates the atmosphere of the audiences she meets on a daily basis. The result is a fantastic new album, "Revelation of Ecstasy and Rebellion" which was released on 14 January, the second anniversary of the "Arab Spring".

A number of new musicians join Rim on her new album, including some Norwegians, including Eivind Aarseth, who plays guitars, as he has done on all the three preceding Rim Banna records, and Bugge Wesseltoft (piano, keyboards and programming), who has produced and arranged the album. He has put together a band that also includes Jihed Khmiri (percussion), Kays Zorrouk (oriental cello) and Mohamed Ben Salha (flute), from Tunis, and Ossama Bishara (kanoon) and Ramsis Kassis (oud) from Palestine. Indian-British Shrikant Shriram plays bass.

The new production has for the most part been recorded and produced in Norway (by Martin Abrahamsen and Bugge Wesseltoft), but some of the songs were recorded in Nazareth in Palestine and in the Ennejma Ezzahra palace in Tunis. Tunisian rapper Mr Kaz is also featured on one of the tracks. The record has been funded by the Norwegian Ministry of Foreign Affairs and "Fond for Lyd og Bilde" (the Audio and Visual Fund).

The producer is KKV, which has been releasing Rim Banna's records since 2003.