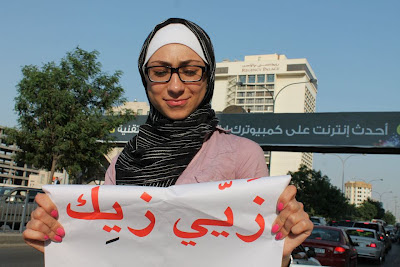 June 2012 saw a campaign titled زيي . . . زيك [Arabic for 'I Am...Like You'] overtake the streets of the Jordanian capital Amman. It included men and women holding anthems and slogans in the streets declaring freedom for women from oppreession, including marital rape. The campaign aimed at eradicating honor crimes and placing women on an equal social status with men. It also demanded the right to Jordanian citizenship for non-Jordanian husbands of Jordanian women.

The campaign demanded the full application of the Universal Declaration of Human Rights for Arab women just as for men. This chart, according to them,  comes before any State, any culture, any tradition, any mentality.

Here is a video of the peaceful demonstration in Amman followed by pictures of the slogans (with my English translation):

These pictures were taken from the following Facebook Pages:  www.facebook.com/Frekeeh and www.facebook.com/intifadat.almar2a [Women's Intifada] (Arabic slogans translated into English below each picture by yours truly):