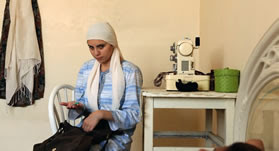 'Private Sun' (Run time: 25 min. | Palestinian Territories | Language: Arabic) tells the story of Mariam who is instructed by her doctor to sunbathe in order to reverse the vitamin D deficiency that is causing her a bone illness. But with nosy neighbors, an overbearing sister-in-law and Israeli surveillance planes, private moments under the sun are precious and rare.

Here is the trailer for the movie:

PRIVATE SUN - a film by Rami Alayan from Palcine Productions on Vimeo.