The 37th Paléo Festival Nyon in Switzerland took place this month from the 17-22 July 2012 and inclkuded a wide array of performers from all over the globe. With six days and nights of festivities, 230,000 spectators, over 210 concerts and shows taking place on six stages, and a total of 200 stalls on site, Paléo Festival Nyon is the biggest open-air festival in Switzerland and one of Europe’s major musical events.

Here is a detailed schedule of this year's 'Village du Monde' performances. Note that all of these were sold out! For full schedule see http://yeah.paleo.ch/en/village-du-monde

On the menu of the gourmet festivities, Turkish peynirli pide, delicious Lebanese mezze, Syrian mjetdara, pistachio, rose and saffron ice cream from Iran, pastries and many other dishes waiting to be discovered! Spectators were also treated to Yemeni coffee, Lebanese red wine, white wine form Israel and beer form Palestine. All this was offered with the utmost respect for Muslim spectators who started their fast for Ramadan on Friday.

Many of the performances from this year's Middle Eastern performances have been recorded and released on this CD (picture above) which may be purchased at THIS LINK.

The next few entries in my blog will feature concert footage from each of the bands/musicians mentioned above. For more info about teh Festival (in English) see http://yeah.paleo.ch/en and to view all the videos from this year's festival see http://www.dailymotion.com/paleo#video=xsbk2b

Here are some pictures from some of the performers at this year's festival. All photos below coustresy of Paléo. For a complete list of images, see http://yeah.paleo.ch/en/media-library/225 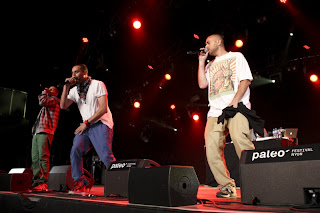