Jurji Zaidan's books were never available in English until now. Due to an initiative by one of Jurji's grandsons, George Zaidan, the author's translated works will finally be unveiled at a conference that will be held at the Library of Congress on June 5 and 6, 2012.

Details about the Zaidan Foundation (including the Conference but with much else about the activities of the Foundation) can be seen by clicking on: www.zaidanfoundation.org

The first novel sponsored by the Foundation and translated by Roger Allen (a leading scholar who also translated Naguib Mahfouz's Nobel wining book) is called The Conquest of Andalusia (فتح الاندلس) and it is available on Amazon at this link.:

Below are the Press Release and Flyer for that novel. Four other novels will be published before the Conference so keep an eye out for them.  I ham also including a biography of the author at the end of this blog entry (taken from  http://www.al-hakawati.net/english/Arabpers/jurji-zaidan.asp)

NEW BOOK OFFERS FIRST ENGLISH TRANSLATION OF ACCLAIMED ARABIC HISTORICAL NOVEL
The Conquest of Andalusia (ISBN 0615499597), a novel by Jurji Zaidan and translated by Roger Allen, depicts the Muslim conquest of Spain through romantic and dramatic adventure story. It tells the story of Alfonso, son of the deposed King of Spain, and Florinda, his fiancé, as they experience the intrigues and events leading up to the Muslim conquest of Spain under Tariq ibn Ziyad at the beginning of the eighth century.

The usurper King Roderic is infatuated with Florinda and the lovers must use all of their wits, as well as the help of influential friends, to maintain their engagement. When Florinda’s father, Count Julian, learns of Roderic’s aim he sides with the Muslim forces to help them depose the evil king. As he helps the army of Tariq ibn Ziyad in its invasion of Andalusia or Southern Spain, powerful forces grapple at the court of the King to decide the course of a battle that would determine the future of Europe.
Zaidan, an intellectual leader of the Arab Renaissance of the early 20th century, produced a series of popular historical novels embraced by the Arabic-speaking world. In their unique mix of history and adventure, they have often been compared to the works of Alexandre Dumas and Sir Walter Scott. This novel is the first in a planned series of Zaidan’s novels to be translated into English and published by the Zaidan Foundation. Written to engage as well as inspire reflection on issues that remain relevant today, this classic novel is intended for readers of all ages. It was translated into English by leading Arabic literature scholar Roger Allen, who also provides readers with an in-depth Afterword and Study Guide for use in educational institutions.

Jurji Zaidan (1861-1914) was a prolific writer who introduced the historical novel into Arabic literature, authoring 22 acclaimed novels spanning Arab history from pre-Islamic to modern times. They have been reprinted every decade or so in the Arabic-speaking world and one hundred translations were made of these novels into more than ten languages. Zaidan also founded one of the earliest Arabic-language literary journals, al-Hilal, now in its 119th year of operation.
Roger Allen is a noted scholar and teacher of Arabic literature and experienced translator of many Arab literary works. He teaches at the University of Pennsylvania, where he serves as the Sascha Jane Patterson Harvie Professor of Social Thought and Comparative Ethics and Chair of the Department of Near Eastern Languages and Civilizations.
The Conquest of Andalusia is available for sale online at www.createspace.com/3597663, www.amazon.com and other channels. Visit the Zaidan Foundation Website at www.zaidanfoundation.org for more information about translations of this and other novels by Jurji Zaidan and the activities of The Zaidan Foundation.

The Conquest of Andalusia (ISBN 0615499597) is available for sale online at www.createspace.com/3597663, Amazon.com and other outlets.  It is published by the Zaidan Foundation, Inc. Website: www.zaidanfoundation.org 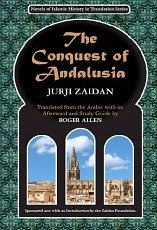 The Conquest of Andalusia by Jurji Zaidan. Translated from the Arabic with an Afterword and Study Guide by Roger Allen.

A historical novel describing the history of Spain and its circumstances be-fore the Muslim conquest, the conquest itself under the command of Tariq ibn Ziyad, and the death of Roderic, the King of the Visigoths.
It is Christmas Day in the year 710 AD in Toledo, capital of Visigoth Spain. King Wittiza has been dethroned, and the impulsive and tyrannical Roderic has been installed as monarch of Spain with the help of the Catholic clergy.

The beautiful Florinda is the daughter of Count Julian, Governor of Sabta, a Christian enclave in Muslim North Africa. She is madly in love and engaged to the charismatic and courageous Alfonso, son of the deposed king. But she has been moved into King Roderic's palace where she is the target of the king’s lustful desires, even though he is married. And Alfonso has been kept as a retainer in the palace so that his comings and goings can be monitored.

Will Florinda manage to thwart the lascivious advances of the depraved king? Will Alfonso be able to foil the king's designs? And how will Florinda's father, Count Julian, react when he learns of Roderic's evil plans towards his daughter? The fast-paced story, full of twists and turns, unfolds as the Muslim armies in North Africa are poised to cross the Straits of Gibraltar and gain their first European foothold in what came to be called the land of al-Andalus. The Conquest of Andalusia is also the story of the contest for Florinda’s virtue and happiness ....

Jurji Zaidan was born in Beirut, Lebanon, on December 14, 1861. His family belonged to the Greek Orthodox community, but religion does not seem to have played an important role in the daily life of the family. Zaidan described his family as living in "average circumstances", but his autobiography indicates that he grew up in very modest conditions. He received a rudimentary education as his father sent him to work in the small family restaurant from age 11. Zaidan senior, himself illiterate, did not encourage any education beyond simple reading and writing. However, at the age of nineteen Jurji took the entrance examination of the Syrian Protestant College and enrolled in its school of medicine. From these beginnings, Zaidan went on to become a well-established scholar and respected member of the community.

He was a self-made man, and in his autobiography he frequently uses terms as "hard work", "perseverance", "punctuality", and “discipline". In his letters to his son Emile, Zaidan writes how reading "about the life of men who reached the top through their efforts and struggle and reliance upon themselves alone" excited him so much, that he never was able to read the whole book through. He felt the stories in the book reflected exactly his own situation and provided advice on how to rise above such conditions.

Zaidan was a prolific writer. He introduced the historical novel into Arabic literature, and was the first to serialize novels in a magazine. His purpose was not just literary entertainment but also national education. The twenty one novels he wrote dealt all with different aspects of Arab history. They intended to familiarize the reader in an easy popularized form with his own past. Though these novels cannot compare in their literary quality to the achievements of later generations, they were the basis for later developments and are still popular with Arab readers. Several new editions have been published in recent years. He tried to educate and instruct his Arab contemporaries about the modern world, as well as about the Arab past and national identity. He is considered to have laid down the foundation for a pan-Arab national identity.

He helped pioneer new forms of literature and style in Arabic. He founded one of the earliest, and most successful, monthly journals, al-Hilal. In it he discusses aspects of modern life, science and technology, literature, history and culture in general. In 1990 in its 98th year, the magazine was still popular and the Dar al-Hilalpublishing house in Cairo is one of the largest in the Arab world.

In addition to the fictionalized form of history writing Zaidan wrote more than a dozen scholarly works. Most dealt with Arabic language, literature, and history. Noteworthy is a five volume work in which he attempted to provide, for the first time, a secular national interpretation of Arab history, as distinguished from the traditional Muslim religious interpretation of the past.

WORKS ON LANGUAGE AND LITERATURE

WORKS ON OTHER SCIENCES